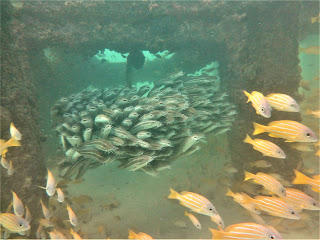 Here is a shoal of unusually large striped catfish. They are normally very tiny fish hudded together for 'safety in numbers' protection. I found these hiding amongst some concrete cubes that the Thai Government have been dropping into the sea to create artificail reefs after the devastation caused during the 2004 Tsunami. They stayed very still to allow me to take my photographs. 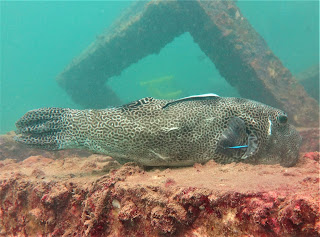 It is amazing how gentle the fish are.As long as you can move gently so as not to  startle them and definitley don't try touchng them as they may well retaliate with a nip or tw0! Here is a giant puffer fishing resting on top of one of these cubes. 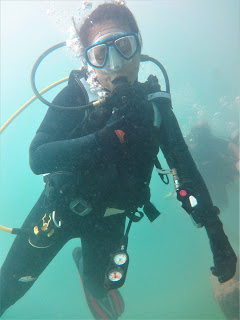 It's good to dive with a buddy....and better still if your buddy can a) see everything and point them out to an unobservant diver like me and b) doesn't use much air so that we can have very long dives on our 12 Litre tanks! Kannika (the wife!) is the best 'Dive Buddy' ever having these two talents in abundance. 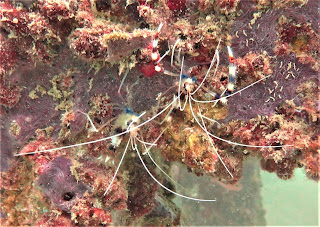 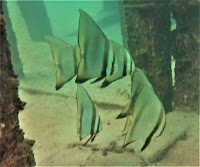 These concrete cubes attract masses of sealife within a very confined area. There are many different kinds of shrimp with these colourful banded shrimp in abundance. 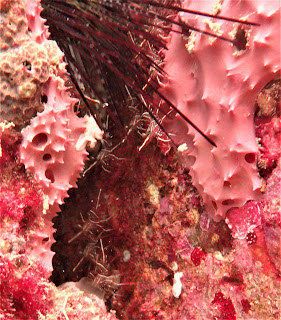 If you look into the cracks and crevices, you can see that they are jammed with shrimps. With today's very clever underwater cameras and plenty of 'white line balance' checking, the photo's reveal the vivid colours that actually appear to the diver' eye as greenish blue. Reds are the first colour in the spectrum to be lost so it is a delight to see what the camera has captured once the images are downloaded onto the computer (or whatever!) 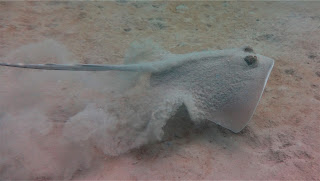 Back in November this particular dive site was devoid of any blue sotted rays which over the years have been a main feature. I'm glad to see they have returned in numbers now and we are again seeing plenty. 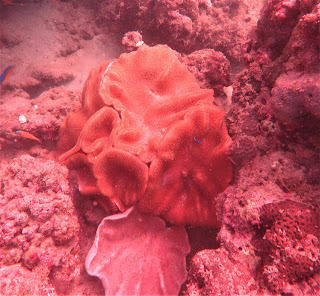 I cannot believe how these images look from my new camera. Now I look at my old photo's in despair at thier lack of colour....and compared to many cameras I see in use and the truly amazing images they produce, I still have  very long way to go. But...this past month has been very enjoyable experimenting with my new underwater toy and some of the results are very leasing indeed. 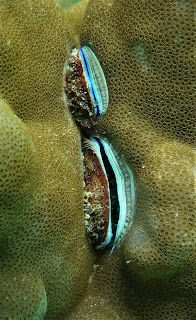 These tiny clams...or whatever they are called...bury into corals with thieiivid blues contrasing with the greens and reds of theirhost. These colours can all be seen with a torch of course.... 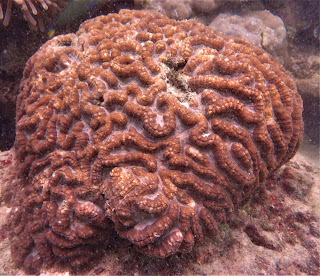 The Brain Coral looks all the more intricate with its natural colours on display. 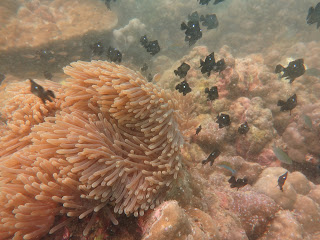 The ever reliable shot of anaemones and friendly coral reef fish. 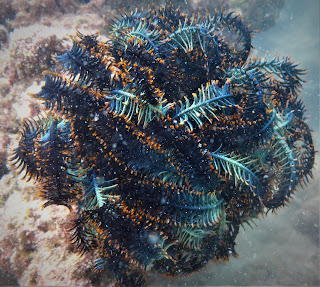 These 'starfish' have marvellous blues and oranges woven into their fronds. 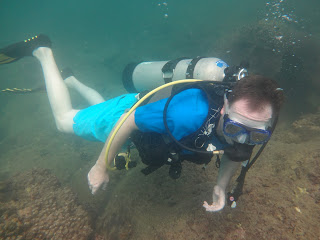 Here we have Dorset's Dashing Diver from Wool, Mr Richard Spracklen, who is as much at home underwater as he is when straddling the bucking decks of the famous angling charter vessel 'Offshore Rebel' under the able command of the young Captain, Jamie Pullin. 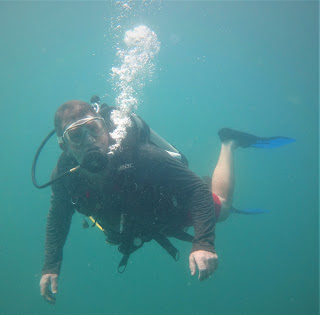 We also have the company of Weymouth Lanscape Gardening maestro, Mr Jonathon Rollanson. on has just started learning to dive during his holiday here in Phuket and has taken to it  like a 'duck to water'......he's a natural!!! 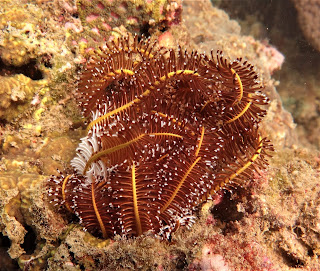 Another starfish....reds instead of blues this time. 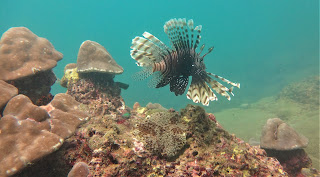 This season the water is cooler....the visibility is much poorer as a result.....but the fish life is much greater with many different species. There seems to have been an explosion in the lionfish population with some very large specimens around! 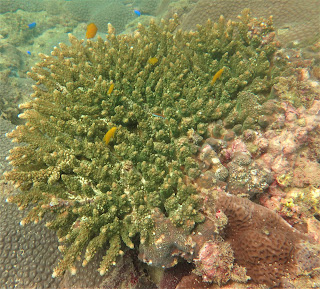 There are so many different species of corals here....with all differing colours. Although the scenery is very attractive and colorful, it pales into insignificance compared to some of the offshore dive sites. 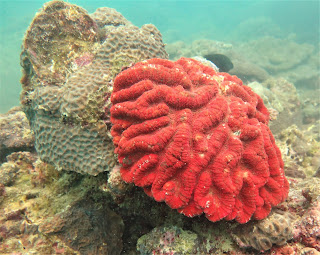 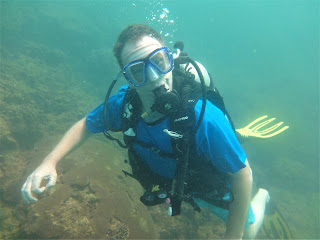 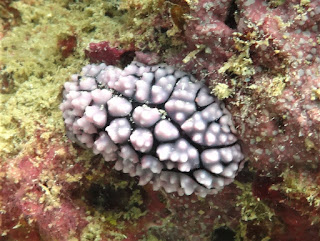 The charmingly named varicose wart slug  is a tiny creature with a big title to love up to. 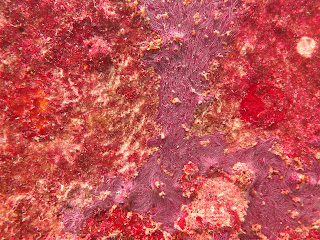 If you expand this photograph the intricate patterns the sea life creates on the concrete cube surfaces becomes apparent. 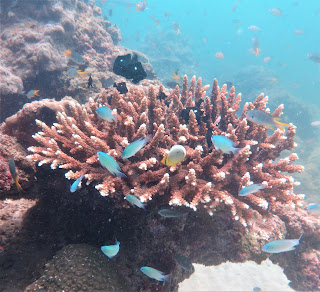 An example of a fine table coral along with its accompanying fishlife. 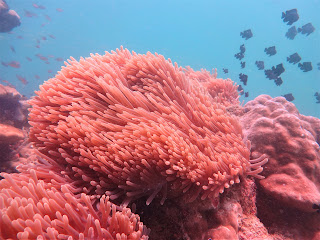 The magnificent anemone swirling in the current....usually with a nemo or tow swimming in and out of its tentacle....which can give you a harsh sting and a delightful rash should you
think you have the clown-fish's invulnerability. 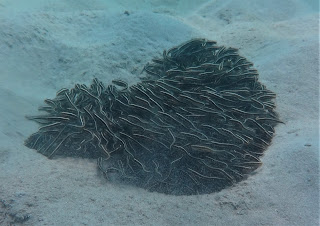 This is more like the size of striped catfish expected as shown by this shoal out in the open but swimming in an ever changing formation to confuse any passing predators. 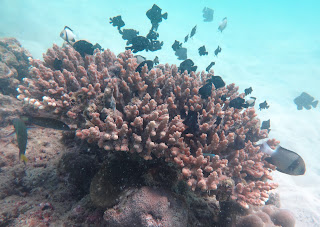 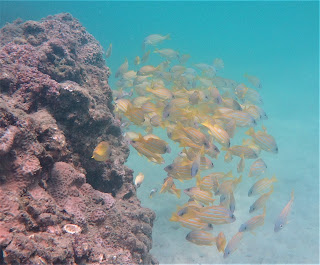 So many fish everywhere this year....it's a real pleasure to be underwater and seeing all this twrling mass of ever changing colour.

This is one of the many delights on offer if you come to stay at my house for your winter holiday....learning to dive...for free!! What more could you ask for.
Posted by Offshore Rebel Fishing Adventures in Thailand at 04:10