We've been fishing this particular lake since 2004 and it has certainly had a somewhat chequered career with peaks and troughs of popularity. Right now the lake is rarely fished. It's under Thai management and its website and advertising is  understandably all in Thai. It is aimed at Thai anglers who tend to come late evenings after work and after the advertised opening hours when we
Westerners are expected to leave.

This means that when we visit, we are often the only people there....which is great. We have the whole lake to ourselves from 0830 to 1730. The tackle  provided by the lake is very limited...which suits us as I have all the tackle provided courtesy of sponsors Grauvell....and their landing nets (all two of them)  are minuscule making it very difficult to get a big fish into. Our local tackle shop owner, Mr Moo, phone up his pals in Bangkok and made me two very large heavy-weight landing nets which are perfect for the job. So, we are very much self-sufficient.

Also...it is not an easy place to find. The traffic in Phuket is generally awful and in that area dreadful. It is only 'up the road' but can take up to an hour to reach crawling along at a snail's pace.

All this is good for us, of course. It means we can continue to have the place to ourselves.....

The lake used to be called Phuket Fishing Park but that name has been taken by the previous 'owner', Aussie Chris to his new lake which is further north in Phuket than we'd like to travel considering the traffic. So, the Thai owner has renamed it with a Thai name which means White Lotus Flower Lake....and that is what I shall now call it! 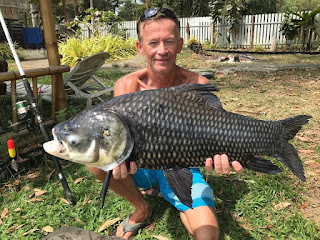 The advantages of visiting this lake have been mentioned above...but the real reason for going there is of course for the fishing. This year the lake is producing mainly Siamese carp along with a pacu or two and sawai catfish. The lake used to be famed for its wild pacu fishing but it's great to see how the main species has changed into a species that anglers very much enjoy catching. These siamese carp are very tough and fight like mad. It's no good trying to bully them....they will win...so there has to be a degree of 'plying' the fish using the rod and reel to effect.

Here's Mark Butland from Hampshire who is now at the end of his 7 week stay with us. Mark has caught many fish over these past two months .....and enjoyed fishing at several venues including Jez Wilson's Chalong Fishing Park, Exotic Fishing Thailand in Phang Gna, Lek's Fishig Park in Udon Thani and this,  the White Lotus Lake.

Each fishing venue is very different which is what makes it all so interesting. As explained above, this particular lake is very much an 'on your own' approach. Unlike the other venues, there are no eating facilities on site (there used to be!!) so the angler must also bring along his pack lunch etc...which is all part of the day out. 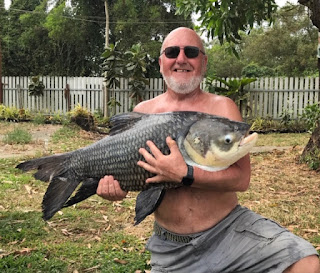 Art Powell, above with a siamese carp,  from Wiltshire is only with us for two weeks and that time has now all but ended. He and Mark have fished everywhere together and shared the costs of car hire etc to make this as reasonably priced holiday as possible. Our £ has been greatly weakened over the past three years and in 2019 in particular. It means we have to be more careful...which in turn means we are not able to support local businesses or the 'better' restaurants so readily.

Scuba Diving, for example, has rocketed in price due to the weak GBP and the ever strengthening Thai Baht....which is why we have not booked even one diving trip aboard a PADI boat . This is a great shame as it is such a wonderful day out. We have opted for 100% shore diving which does not offer the same experience as being way out to sea over a colourful reef....but a 70 minute shore dive costs £1.50 per dive (with a £5 lunch to follow!) as compared to a PADI Dive Day which starts at about £70 up to £120 per day now. 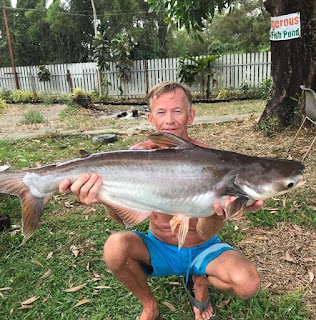 There are also walking catfish and sawai catfish in the lake.....and a very occasional mekong cat as well as the pacu and carp. 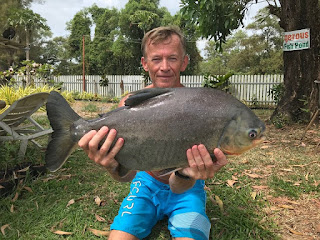 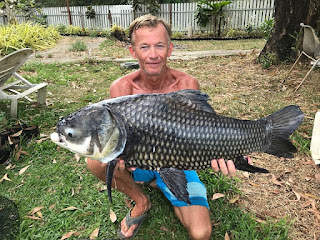 And back to another of Mark's siamese carp....one of 11 carp Mark caught yesterday (Sat 11th Jan 2020) along with several pacu and cats.

Right now we have Weymouth Charter skippers Ryan Casey (Meercat), Katie Balem (Eclipse) and Jack (Eclipse) fishing at Lek's Fishing Park. They will be arriving on the 13th which is when we say farewell to Mark and Art.

No doubt Ryan & Co will be itching to get at the two Phuket Lakes we fish!!
Posted by Offshore Rebel Fishing Adventures in Thailand at 22:44