A trip out on Phuket based charter boat Fish Eagle!!

The moment you step onto charter boat Fish Eagle you cannot fail to be impressed. This boat is immaculate and in true ship-shape order with a 'place for everything and everything in it place'. And that's how it has to be because with seven rods out set at various ranges, some with lures and teasers and others fishing that's a lot of lines in the water. The boat is trolling at between 5 and 6 knots and when a sailfish takes a bait or lure it's all action.

Andrew Inman, the deck manager, came from the UK 11 years ago, and he is a big chap. Adrian, from Cheltenham, is a keen rugby player and fan and we were discussing which position Adrian would employ him in a rugby team. The answer was undoubtedly front row. When Andrew moves to set a hook,, he moves with power and speed....and if some silly customer were to be standing in the way it would not be pretty. Andrew explains he uses the Spanish archery technique to move obstructive customers...it's called the 'El Bow' movement. Believe me....you don't want to experience it! 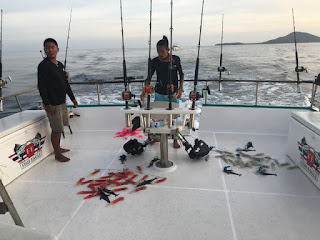 The deck space of Fish Eagle is 5.5 metres wide and it is clutter free just as a good deck should be. Customers' gear is stowed away in the massive cabin. There's a Fighting Chair and a couple of large fish boxes packed with ice for drinks etc. Here two of the three man Thai crew are preparing the teaser rigs which to my very inexperienced Game Fishing eye looked incredibly complicated. 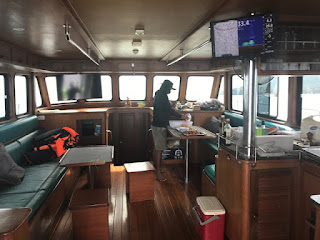 The cabin of Fish Eagle is enormous and beautifully fitted out with glistening wood work. The first thing a customer must do when boarding a Thai vessel, angling or diving or site-seeing, is to remove their shoes. This helps keep the deck immaculate.....maybe some of you can recall UK charter skippers going into an early morning rage of despair and frustration when anglers board the freshly scrubbed boat in muddy boots and within seconds the whole deck is trashed..... 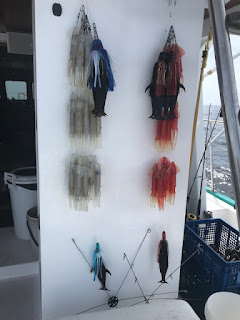 The various teasers and attractors are neatly stowed ready for deployment. 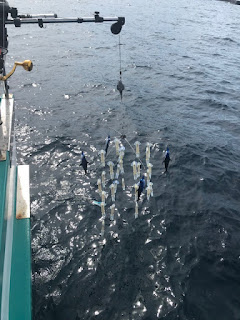 Difficult to see against a glistening sea but here is one set of attractors,  called 'The Dredge' ready to be lowered using the 12 Volt jiggers. The distance these are presented behind the boat is what makes all the difference to the catch rate with baits or lures presented behind the attractors. Getting all this correct and remaining tangle free takes a lot of working out and on talking to Andrew it is clear just how much thought and attention to detail has gone into all this.

Since April 2019 I have been following the Fish Eagle postings. The catch rates have been incredible and very encouraging after the many years I have been coming here (since 2004....16 years now!!) and seeing very poor returns. Andrew believes that the currents have changed with sea temperatures consistently cooler at 28.5 degrees right now as compared to previous years when temperatures in the 30 to 32 degrees Centigrade would be expected.

Our shore diving at Kata this 'season' is very different. I have not seen any of the rays that have been plentiful over the years yet have been engulfed with massive pelagic bait shoals which totally block out the sun, the bottom and what's ahead. It's a very strange and disorientating sensation being inside such a shoal that is deliberately moving in that synchronised rhythm that we  see on Nature Programmes when fish aim to confuse a large predator within their midst. I imagine that's how they must view a scuba diver....anyhow, I digress! 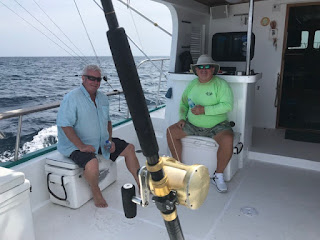 This trip was to be Adrian's Christmas present from his overwhelmingly thoughtful and generous wife, Jennifer. She's arranged it with me to sort things out for Adrian to try and fulfil his ambition of catching and landing a sailfish which is something he has tried to do over the years in very countries without success. Because of Andrew's amazing track record over 2019, I thought that Adrian really would be in with a great chance aboard Fish Eagle. But even before we actually started the fishing, Adrian was having a great time. As a very experienced angler, he appreciated the high standard of vessel, fishing gear, lures and crew that were evident from that first step aboard....and Andrew is an excellent and extremely knowledgeable man to have on the boat for everything he does to make the trip memorable. 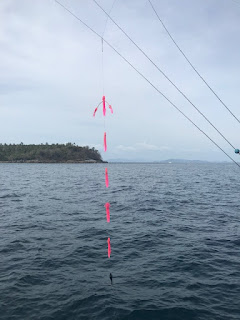 This is another set of teasers called 'Floppies'. They run either side of the vessel and are set out wide on the outriggers. 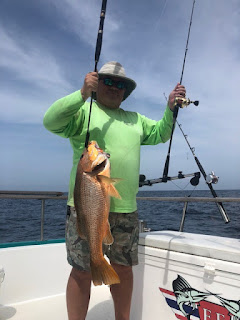 We trolled out to an area where we intended to fish on the drift using baits and lures. Andrew explained  that it was a waste of time trying for sailfish until towards the end of the ebb tide in mid-afternoon and offered the drift fishing alternative which we were please to experience. 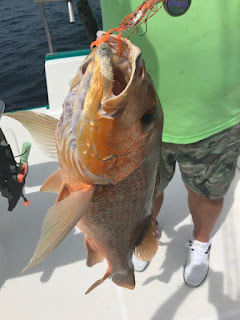 e first fish aboard (hence the ice...yes, we kept them...and we are eating them today) were mainly groupers taking squid baits on simple 3 hook paternoster rigs. The lure which Andrew introduced us to is called a Tai rubber. This is a Japanese lure and Tai is the Japanese word for the fish we would probably call snapper. (Languages...confusing, ain't they!?) This fish is a Golden Snapper and will be featuring in traditional Thai (as in the people and the country we are in!) Tom Yam Bla..which is the famous Thai soup. Apparently Golden Snapper is THE fish to have as the main ingredient.

Back in good old UK, we have tried bass, turbot, cod and plaice in Tom Yam soups....but these wonderful fish simply do not work. The very best fish to use is the humble pout as it's delicate texture (when very fresh!) absorbs the various Tom Yam flavours...perfect. So, don't throw your pout away, chaps.  Rather get someone in to knock you up some Tom Yam! 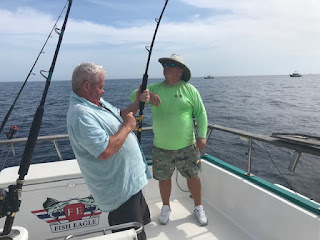 Adrian bending into a bottom fish on the drift. 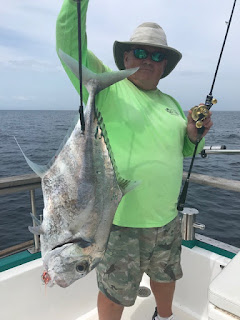 Andrew Inman presenting a very lively permit (this IS the wrong name...I'll get the correct name later!) taken on a Japanese Tai rubber lure. 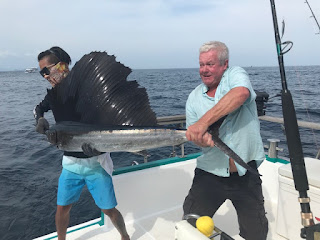 And here is Adrian's first ever sailfish. Andrew usually has the sailfish released in the water without being lifted onboard.....but this was a special occasion as it was Adrian's first after many years of trying. 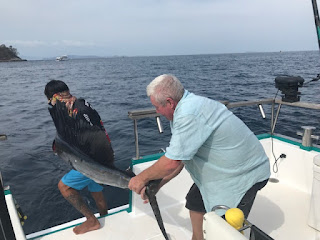 Photo's have to be taken quickly as the sailfish is out of the water for a few seconds only. It is then lowered back into the sea and held head into tide to revive its energies before being let go to swim free. Circle hooks are used to ensure quick and easy release.....and Andrew has clearly spent a long time considering the best hook sizes for the various bait presentations but also easy fish release. Today,, for example, the circle hooks were size 7/0.

This all brings back the endless discussions me and my commercial bass teams used to have about every tiny detail of the tackle we were using back in the early 80's aboard my 38 knot commercial bass boat 'Vanishing Trick'. Remember those days, boys?? 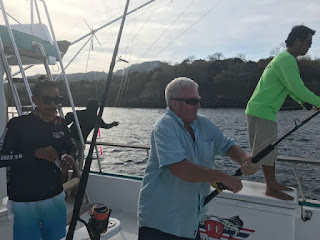 drian into another sailfish....this was turning out to be a splendid Christmas present. Adrian was keen to point out that the fighting qualities of the sailfish far exceeded the tenacious power of a big mekong catfish. 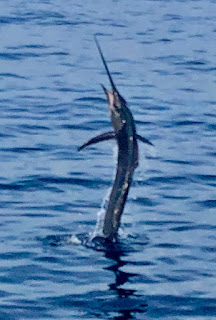 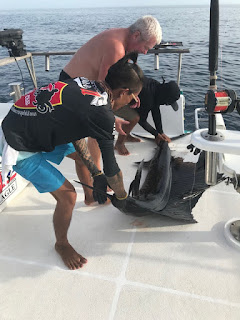 This sailfish also came aboard as it was so much bigger than Adrian's first.... 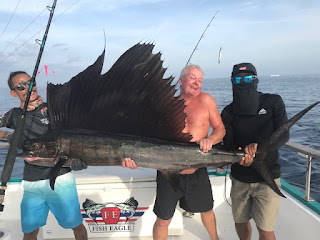 Here we are then.....Andrew described this fish as the biggest he's had onboard for sometime which made Adrian's day even better. 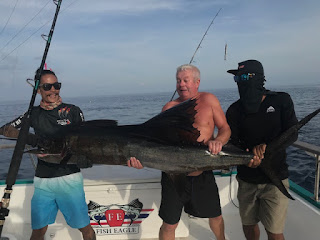 Posing with the help of two of the Thai crew. A few people have asked me why the crew 'hide their faces'. Well,  that's not what they are doing. They are sensibly protecting themselves from their daily battering by a merciless Thai sun. 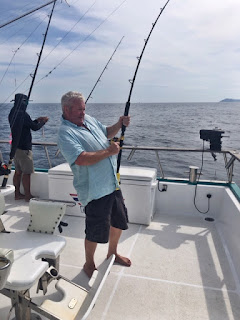 The action kept going for Adrian with sailfish leaping all around the boat....I can't seem to download the videos I took on my phone...so please take a look at my Facebook page where there's a couple of short videos in which the leaping sailfish can be seen. 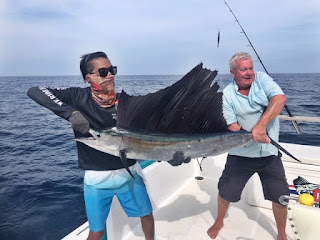 These are such spectacular fish...very pleasing for Adrian and a massive thanks to Andrew and Team Fish Eagle for their unrelenting enthusiasm and work rate. 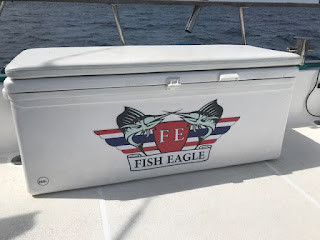 
Posted by Offshore Rebel Fishing Adventures in Thailand at 19:41