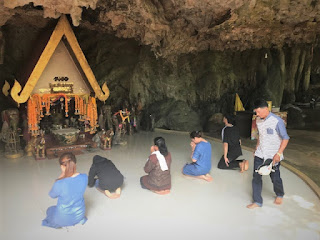 Thai people like caves but are very aware of the dangers in entering them as highlighted by that lengthy incident with the young Thai football team getting trapped due to fast rising water. We are still very much in the season of such instantaneous deluges so it's only natural that our Thai friends made their peace with Buddha and the various spirits of the Elephant's Stomach Cave before entering. 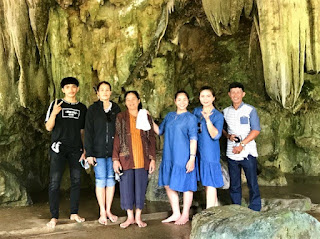 Kannika's family plus our House Keeper, the wonderful Nan, pose before boarding the Kayaks for the first past of the journey. The two ladies dressed identically have done so on purpose so as to confuse the cave spirits. 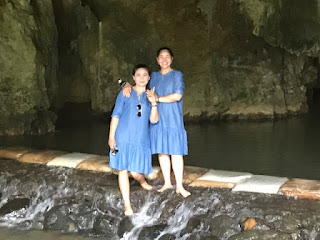 Who is who...that is the question. 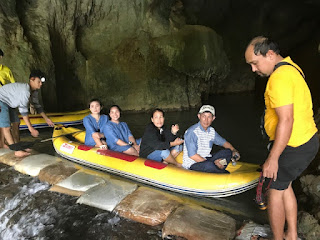 First Kayak ready to go....the cave complex is quite flooded and so boats are used to traverse the deeper pools and then reach some stairs to take visitors above the stream (sometimes a river!) running through this particular cave. 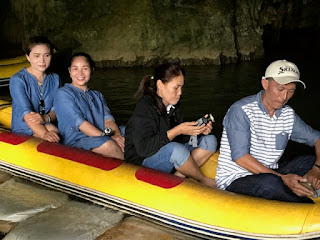 Hoorah...we're off. Look how jolly happy Kannika is. She never stops smiling and laughing. 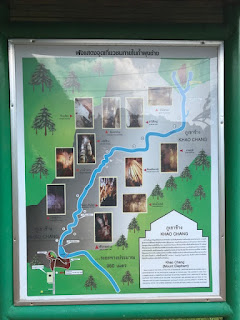 I've been in this cave complex quite a few times so on this occasion I chose to look around the surrounding grounds. There's quite a bit of information about the discovery of the cave system and the myths surrounding it as well as a vivid description of the resident Pi or Cave Ghost. The 'map' in the grounds shows the extent of the cave and how far in the trip goes. This takes a good hour and involves quite a lot of walking....it's VERY advisable to wear shoes that you don 't ind getting wet as it's sharp underfoot especially when walking along the stream bed. 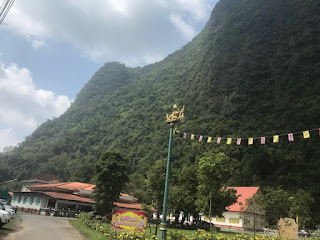 Now your avaerage Thai sees spirits and animals everywhere. It's obvious (is it????) that the mountain profile resembles and elephant's head. See the 'bump' of the head a bit off to the left of the picture?? And that then slopes down to the left resembling the trunk?? Obvious, innit?? 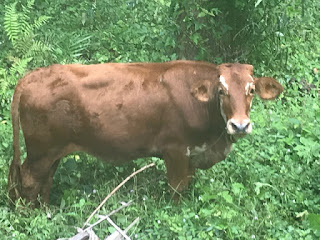 As I type away right now I am looking at a gurt cockerel that has entered my garden and is starting at me. It knows that I have been threatening to wring its neck because it's been blasting away every morning at 0400. And now it;s out there...staring...daring me to leap up and grab it. Yep; there's animals everywhere in Thailand. Wandering around near the cave entrance are some particularly well conditioned cows, multitudes of dogs and cats and....monkeys....loads of them!! 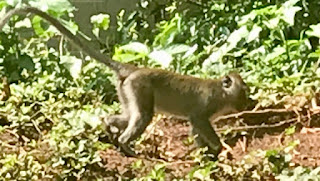 Monkeys...you got to be a bit wary of them. They are wild and they bite.....and they are not afraid!! 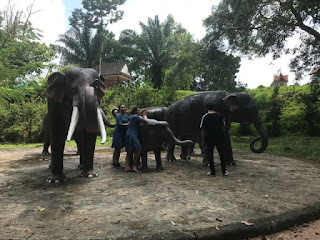 TBecause the grounds also encompass a temple there are often various services/celebrations/festivals occurring and on this occasion here was a funeral of a policeman going on. I was wandering around and was invited into the ceremony. I didn't take any photo's as felt it improper even though I was told I could. There were six policement in full uniform banging away on very big drums and plenty of that eerie wailing wind instrument that you can see Thai people selling on the beaches...bit like pan pipes....and a large congregation of police...men only. In the middle of this large hall was a table with the dead policeman laid out. Several of his colleagues were tying his feet and legs together ready for him to be lifted onto a carrying table and then taken next door to the crematorium. There was an air of jollity and joke cracking over the temple tannoy taking place. Thais don't view death in in the solemn manner we tend to...after all they will soon return in another body or shape depending on how well or badly they behaved in this their most recent life. 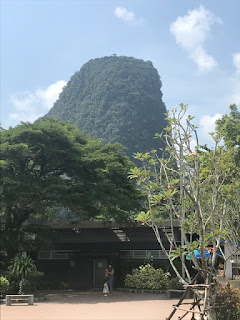 Outside, towering over the temple grounds,  the crematorium, the animals and the Elephant Stomach Cave is this impressive Karst mountain. The brilliant History book 'A History of Phuket and the Surrounding Region' written by scotsman Colin Mackay, explains that the majestic scenery of the Phang Gna Province is as a result of a 'vast and ancient coral reef that grew up some 200 million years ago when the sea level was 200 metres higher than it is today'. this ancient reef 'the bigget the world has ever known' was left 'projecting high and dry in the air' when the world's sea levels fell. Mackay explains that when coral dies it forms limestone which is easily eroded by rainwater so that now 'large chunks remain standing starkly upright, jutting strikingly out of the sea and green forests of Phang Gna By and Krabi'. 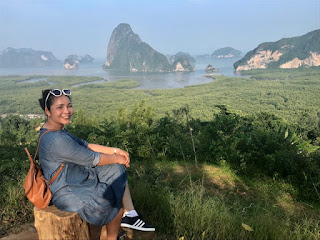 The striking limestone landscape of Phang Gna Bay....remants of the 'largest coral reef the world has ever known'.


IF you are coming to this part of the world it really does enhance the experience if a bit if reading or research can be done beforehand. I throughly recommend Colin Mscksy's book. It is immensley readable and absolutely stacked with fascinating insights and facts....
Posted by Offshore Rebel Fishing Adventures in Thailand at 00:41