Ah...how time races away. It seems such a short time ago (2016) that I was watching a succession of mini-diggers working away at the land that was to become Jez Wilson's Chalong Fishing Park. Now a full three years on and I was invited, along with fellow friends Russell Shaw from Bournemouth and Dereck Wilson from Paignton in Devon, to fish for Team Islander against Team Walkabout led by their Larger-than-Life Captain,  Flob. (Flob tells me his name actually means Fat Lazy Old Bastard....but he can't half sing!! You should hear him belting out Bad Company numbers in style!) 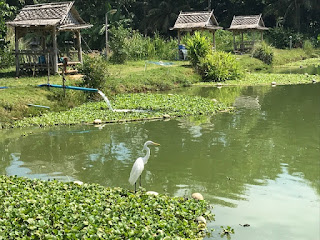 Arriving at the Fishing Park in time for a good old English traditional breakfast, all was peaceful in a pre-match calm. Nice to sit back with a nice cup of properly hot tea and admire the birdlife around the water's edge. 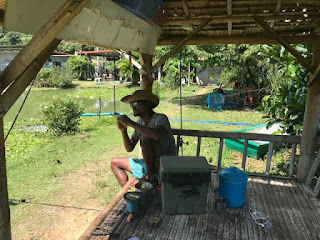 Boy (that's the Head Guide's name) has been with Jez for a couple of years now and is a brilliant guide and adviser. He leads a team of four other Thai lads who jump to his command and race around the lake to make sure they are on hand with the net and assistance as required. These five Thai lads work like mad...superb! Here's Boy (above) preparing a few sets of tackle in advance for anglers who require assistance. 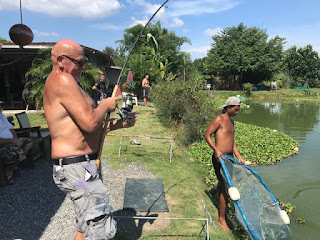 Right from the off, Walkabout owner  (Walkabout is a very popular Sports Bar in the family orientated resort of nearby Karon) and Team Captain, Flob, was into fish landing two before anyone else got themselves sorted but fortunately Dereck Wilson from Paignton responded with a point winning catfish and the fish started coming in all around the lake. 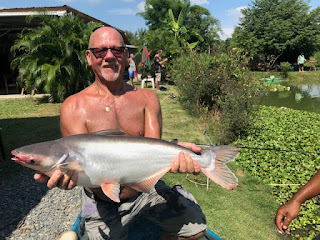 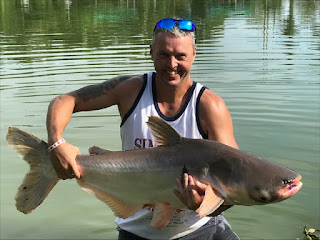 For a time Team Islander were in the lead in the 'Biggest Fish' category with this mekong catfish caught by Graham Hughes from Bedfordshire. 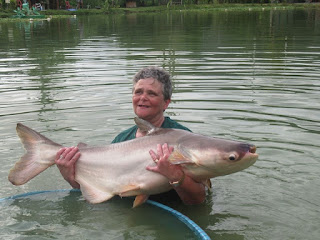 Graham's efforts to win the heaviest fish category were soundly destroyed when Janet of Team Walkabout skilfully played this 30kg+ mekong catfish to the net. Janet is an excellent angler and gave a terrific demonstration of  how to beat a hefty catfish on light tackle in front of a wildly cheering team of Walkabout men! 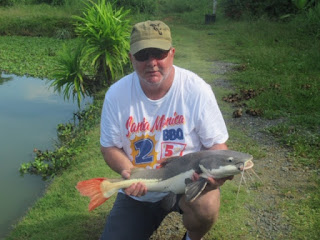 There were 8 different species, including red-tail catfish,  caught amongst the 120 point scoring fish over the 6 hour event. The two 8 man teams therefore averaged 7.5 fish each, so a little over a fish per hour per angler. There were many more fish actually caught but Jez had introduced a minimum size limit that each opposing team member was keen to check was being adhered to!! In keeping with the sense of fun, Jez had introduced the fish minimum size as being measured by a large beer bottle. 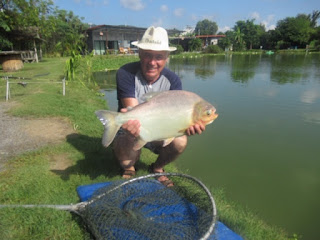 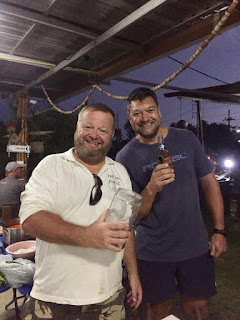 Team Islander Captain, Richard Valentine, did his best to encourage his outfished Islander team with a fine display himself and plenty of advice. There was a period of time when I was actually leading the most fish section with 16 fish but in the last 30 minutes my 'swim' died and Andy Isoft quickly changed his match tactics to take 3 fish in quick succession to overtake me for a well deserved win! Hurrah!! The five man Thai team of guides also got stuck into cooking at the BBQ and bringing round a varied array of Thai and European food treats. 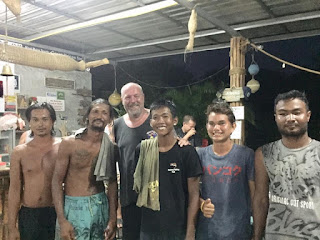 Flob (Fat Lazy Old Bastard...remember??) was at his usual dazzling socialite best and managed to get the Thai  lads to stand still long enough to present them with a cash collection from the competitors for all their hard work. 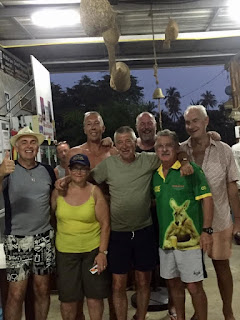 And here they are...Team Walkabout in all their winning  glory....a white wash of an event! Heaviest Fish,  Most Fish and Winning Team total of 70 points compared to Team Islanders 52 points.

This was a great event. The fishing salas were all full of competitors, who were imited to one rod each, and friends with an increasing number of supporters turning up. By evening the bar and restaurant area was packed with many locally based ex-Pats and families along with visiting anglers such as Dereck, Russell and me.

Jez has done a great job of creating something much more than simply a 'Fishing Park'. This has become a centre for people to meet up, have some nice food and relax by the bar as well as enjoy some often hectic fishing.

Jez is still  working on improvements, A second lake area has been dug out with water supply pipes and oxygenators in place ready for the water once the lake bottom has settled down. Despite recent flash flooding in parts of Phuket this has been the driest 'wet season' on record for this area and the reservoirs are only at 30% full with continegency plans being hastily prepared....so it's doubtful that Jez's second lake will be filled this season.

But...Well Done to him and his team for creating such a popular place and Good Luck for an excellent future.
Posted by Offshore Rebel Fishing Adventures in Thailand at 03:00