Today, Thursday 14th, Iwe took Kannika's family to the nearby Thai run lake. This is the first time any of the family have held a rod although they have used handlines to fish in the River Mekong near to their home in Nong Kai. 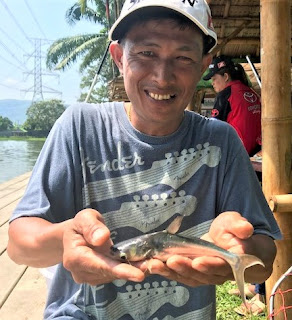 It's not easy explaining in Thai language how to cast etc using a fixed spool reel which might explain why the tackle ended up in the trees on a number of occasions. Here is Kannika's brother-in-law, Rung, with the tiniest fish I've ever seen in this lake.....but good to see they are breeding naturally. 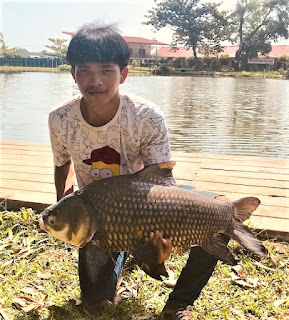 Living up to his name....which IS Fluke....Kannika's nephew was the first to master the intracies of the tackle and was soon casting the groundbait balls and bread bait a decent distance and hooked into his first ever Siamese Carp. It's always a struggle when an angler doesn't realise that the rod is an essential part of fishing and prefers to play the fish direct from the reel through the eyes straight to the fish. So, after quite an uneccessarily hard and lengthy battle (thank goodness for over-gunned main and trace lines!) the carp was hauled towards the net! This fish weighed close to 20lbs. 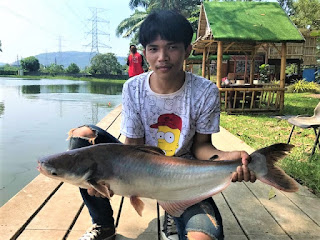 And here is Fluke again with a catfish. These are very common in the  lake along with Pacu which tend to congregate in one particular area for much of the day and what seems like an increasing stock of carp positioning themselves right in the middle of the lake and nicely within casting range. 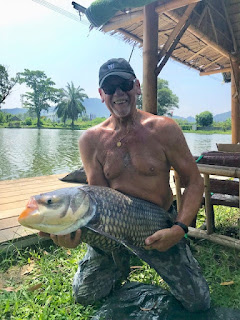 Dereck Wilson is here with us as well for a three week holiday (well; it was supposed to be two weeks but Thailand has a habit of persuauding people to stay especially when the forecasts for back home are so dire!). Dereck, who helped crew Bex Florence's 'Kelly's Hero when I had the pleasure of skippering her back in June of this year for a five day charter) is an experienced angler and was catching a steady run of carp right from the first cast. 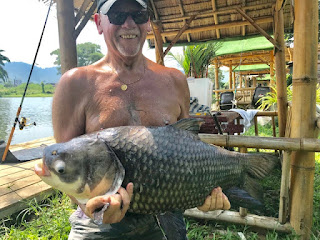 Yeah, I know they look the same but this is a different fish. As it was my first visit of the year I tend to get over-excitied with the camera as it's always hard for me to believe the power of these fish and just how readily they were feeding. The lake isn't fished much for various reasons and is very much now geared towards Thai folk who don't fish much unless it's to catch fish to eat. It was difficulot to explain that the fish were to be returned rather than wacked on the head and taken back for dinner. 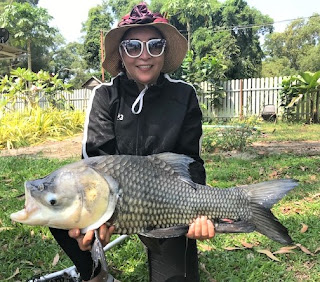 Kannika is now a very able angler as those who know her from her days on Offshore Rebel will know. She can belt that bait out a good long way which becomes an increasingly important tactic to employ as the day heats up and the fish move further away from us the noisy anglers. Here she is with another nice Siamese carp. 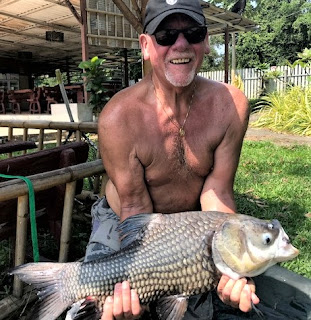 And Dereck again....he lost count of the carp he caught which is a very good sign of the amount the lake seems to be holding. 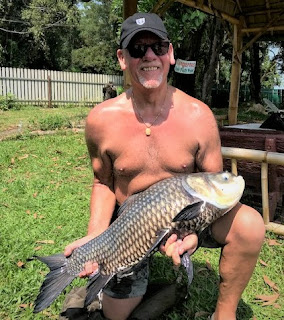 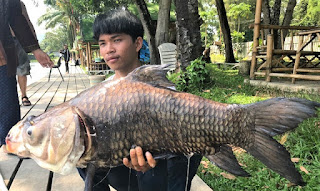 Fluke caught the best carp. They are not easy to hold when you are not used to them. Many fisheries here encourage the customer to get into the water in order to safeguard the fish. It's not good to drop these hefty fish when trying to get a photograph on land. There's no way the Thai's are going to leap into a deep lake and graple with their fish for a photo so I now have 3 cushioned fish mats to try and look after the fish. 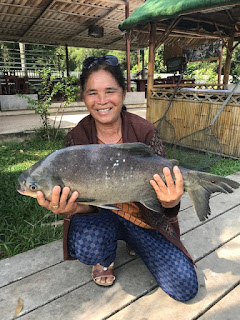 Kannika comes from a BIG family. She has 8 sisters and one brother...so there are 10 of them! This is Sanawng who is the eldest sister at 62 years old......and who was also soon at home wacking the baits out; they're strong in the arm, these farmers! Here, Sanawng presents a decent sized pacu 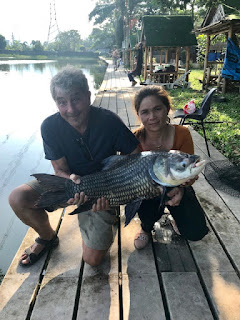 Kannika's youngest sister Walla with her first ever carp...very quick learners these Thais 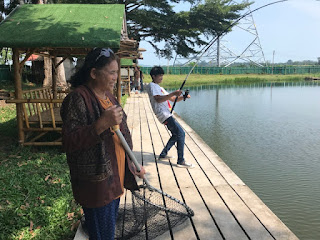 And finally an action photo of Fluke bending into another very hard fighting carp.

It was indeed a very exciting and action packed day...and certainly presented a great contrast to what we had planned for ther family that evening.....which was a trip to the very popular Simon Cabaret (Ladyboy) show in Patong.
Posted by Offshore Rebel Fishing Adventures in Thailand at 18:15