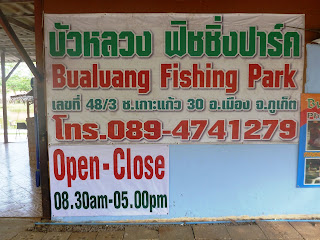 The Bualuang Fishing is in Phuket. It is not far from a famous Thai 'landmark' called Heroine's Monument. It is a lake that I have taken friends to for many years and we have always used my fishing tackle. Local ex-Pats sometimes fish here and they too provide their own fishing gear although the lake does have some to offer customers. This season the lake has not been very busy which is great for us as we have it pretty well to ourselves. It also helps that I had two heavy duty landing nets made for me to cater for the very large fish (by UK freshwater fishing standards) which we regularly catch. 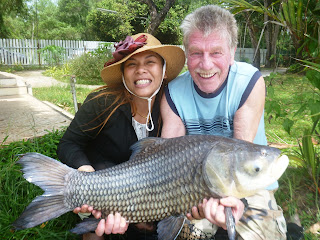 We were very fortunate to be kept busy throughout our 6 hour session at the lake which was aimed at carp and pacu which are the fruit eating pirhana, famous for their almost human like teeth! Tukta caught the first carp and David was there to assist her lift it for the photo. 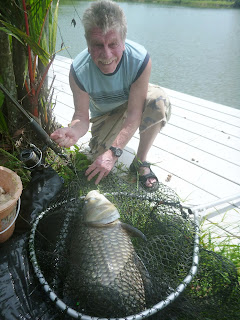 Here's Dave with a very nice Siamese carp. We do try to look after these fish. The landing net, it can be seen, is large and heavy duty and we keep the fish on a soft unhooking mat which we keep wet.

As soon as the photo's are taken we are able to wrap the fish in the wet unhooking mat and return the fish to the lake. 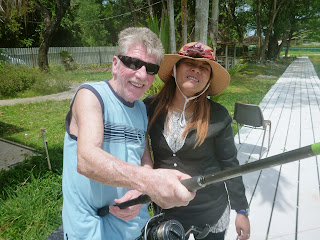 It was pretty well non-stop action right from the first cast....and these fish do put up an impressive scrap.

We are using the carp rods provided by my sponsor Grauvell paired with Shimano bait runners loaded with 20lb mono to 70lb braid hook lengths. The braid is used as the pacu will chomp through the mono traces with ease....even 60lb mono!! 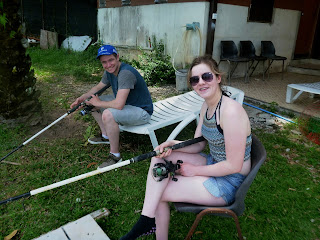 And here are our young Weymouth skippers...kindly waiting for me to deal with Dave and Tukta's carp before leaping to their feet and striking into their own fish! 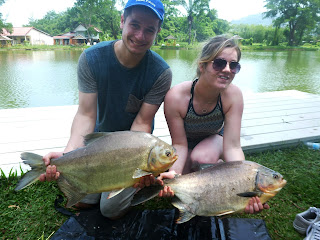 And yes, they were into a double hit of pacu...the most manic scrappers in the lake!! 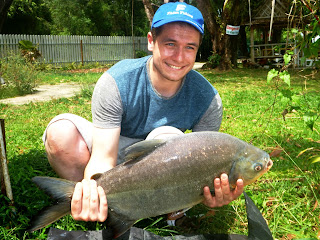 Here's Ryan with another one....we lost count of the amount of these fish we caught as they are very plentiful.... 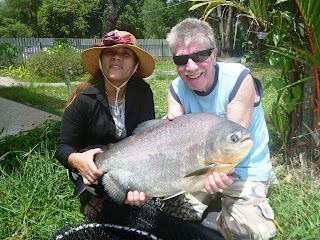 Tukta was also bringing the pacu to the net keeping Dave busy assisting her with photo presentations as well as playing his own fish. 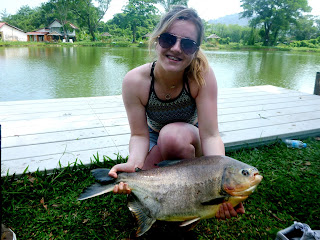 Katie has caught quite a few of these Phuket freshwater fish now and is handling them very well.....and no problem presenting them for the photo's.

And, like a good skipper, she was running around with a net giving me a hand to land the fish.

It's good to have such able anglers as the action really is fast and furious..... 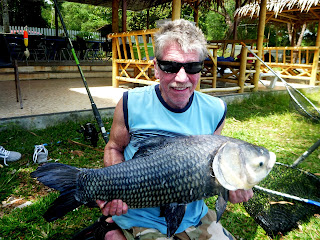 The team caught quite a few carp.....all about this size. Here's Dave with another fine specimen which gave the usual dogged fight right to the net. 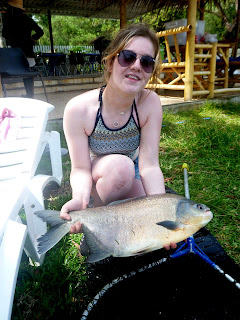 Katie has now certainly got the hang of pacu fishing!!! 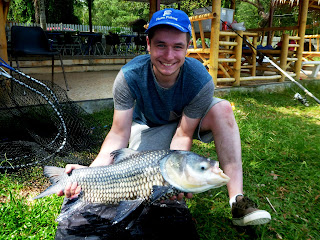 And here's Ryan with another Siamese carp.

We were using either bread crust or chicken livers as the hook baits suspended on a short trace under a cage feeder. We were using the cage mix provided at the lake. 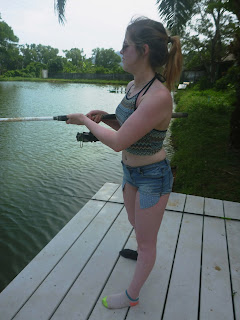 One thing's for sure....it's best to fish light (as in clothing) as it IS a tad warm. We were probably in at least 30 degrees today but with a very welcome breeze blowing.

We certainly drink a lot of water when lake fishing!!! 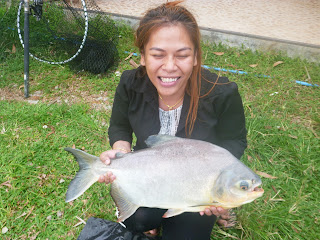 And to finish up with...here's yet another pacu caught by Tukta who is now firmly hooked on fishing much to Mr Lovelock's delight!


In a couple of days we will be joined by Weymouth's very well known couple Andy and Gill Alcock. They will be accompanying Ryan and Katie on their further fishing adventures which will take place on the 15th and 16th of this month.

Posted by Offshore Rebel Fishing Adventures in Thailand at 05:02