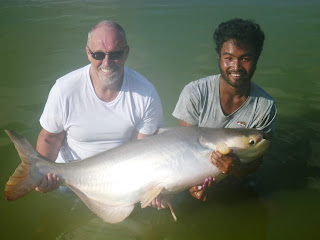 Today, March 20th, was Katie and Ryan's final day of their holiday and they opted for a final fling on the fishing at our nearby Chalong Fishing Park.

Our most recent trips have resulted in some lively action with mekong catfish.

Here's some information from Wikipedia about this iconic species.

Representation of a Mekong giant catfish at a Buddhist temple in Chiang Khong.

The Mekong giant catfish (Pangasianodon gigas; Thai: ปลาบึก, RTGS: pla buek, pronounced [plāː bɯ̀k]; Khmer: ត្រីរាជ /trəy riec/; Vietnamese: cá tra dầu), is a large, critically endangered species of catfish (order Siluriformes) in the shark catfish family (Pangasiidae), native to the Mekong basin in Southeast Asia and adjacent China. In Thai folklore, this fish is regarded with reverence, and special rituals are followed and offerings are made before fishing it.[2]

The first mekong giant catfish fell to our very own Weymouth Quayside Fuel supplier, Mr Andy Alcock with a mekong catfish estimated to be 35kg kg. These fish are so powerful that they can make runs clear to the other side of the water. It's really important for all anglers to retrieve their tackle ASAP to avoid the inevitable line crossings and tangles that will ensue should not this action be taken with the utmost alacrity. 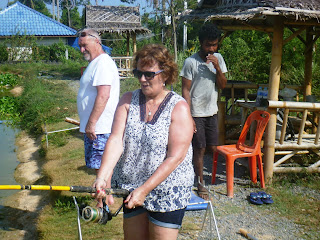 Soon after Andy's fish, wife Gill was also into a an even livelier catfish. 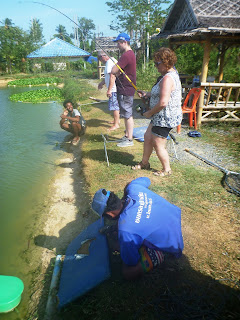 Her lengthy battle with said beastie drew in an appreciative crowd of onlookers....

One of the guides can be seen in the foreground indicating his respect for the fish.... 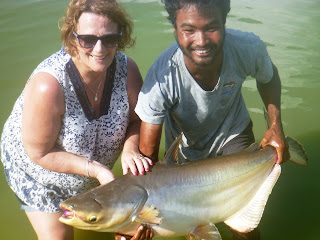 And here is Gill's fine fish...estimated at 25 kg.

The Thai guides are always on hand to leap in and assist with fish presentation. It's not easy hanging on to one of these fish and still retain your footing when standing in the water. 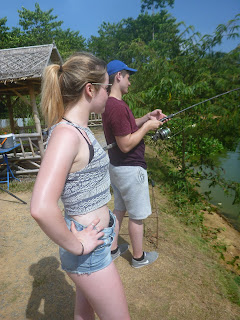 Meanwhile, on the opposite side of the bank, Captain Ryan was gently toying with his equally hard fighting fish....but this was a different sort of fight with the fish staying close to and deep rather than racing off across the lake. 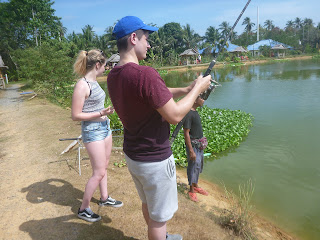 Aha...those hours spent on Chesil beach playing big blonde rays and conger through the surf were paying off! 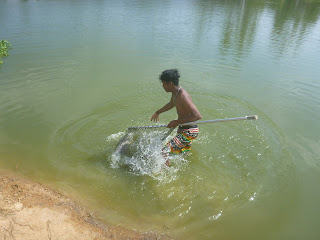 The guide enters the lake to guide the lively fish into the net. 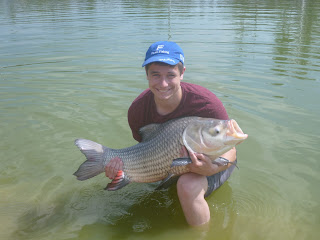 And here we have a very nice Siamese carp. These are magnificent fish with boldly coloured black and silver scales. They too are amazingly strong and must be held carefully for a photo shot. (I watched a big carp slap a young angler right across his back when I was at Gillhams fishing several years ago....it looked like the lad had been lashed with a whip! T'weren't pretty!!) 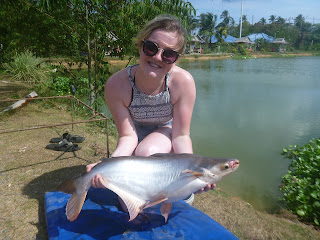 And Katie was soon into a smaller species...the sawai catfish which was one of a number of these caught. 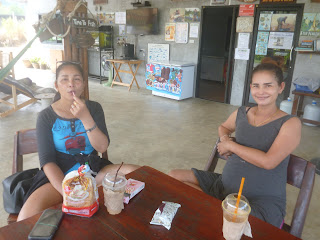 No...she's not having a crafty fag. Here we see Kannika and Jen, soon to have her first baby, waiting for me to turn my back so that they could start eating...... 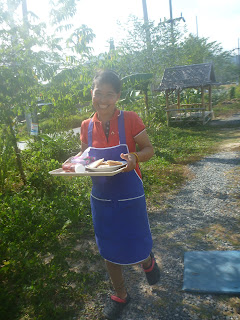 It is actually quite difficult to spot a Thai lady when she is NOT eating.

Chalong Fishing Park has a nice menu with a mixture of Thai and Western foods including a fine selection of meat pies!! 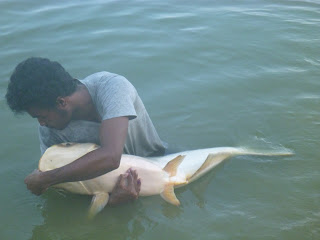 Here's another very fine mekong catfish with the fishing guide cradling the fish in order to gently remove the hook and then give the hook area a squirt of iodine. 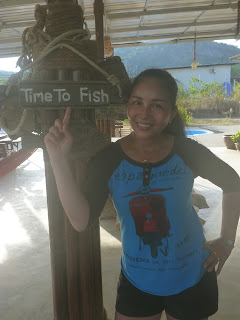 Keen to show she has other talents than just eating when with her Thai lady friends at the lake, Kannika lets me know what we are actually here for....yeah, right. 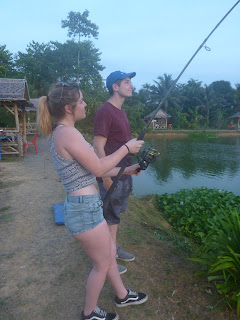 Good job Katie has her priorities as she bends into another fish. Katie landed four different species of catfish with a redtail, a walking catfish, several sawai and a mekong catfish. 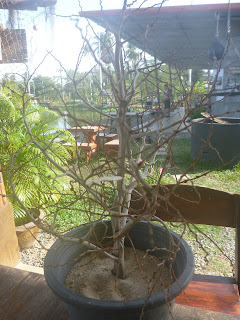 Wandering around with my camera, I discovered that the rumours of Jez intending to start growing various indigenous flora as well as a few imported species was indeed correct. Here we see a particularly pretty example of the  rare leafless bush, known for its uncanny ability to appear to be dead. Apparently it bursts into a myriad of spectacular coloured flowers at night....but no-one has ever been fast enough to capture this display. 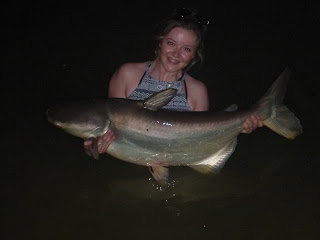 And to finish up with, our newest, youngest and best looking skipper (apart from my cousin David, that is) in Weymouth presents the final fish of the 6 hour session with another dazzling mekong.


Our merry pair, as said above, depart today for the sub zero temperatures of the UK with Katie hoping to go to sea on Sunday aboard 'Eclipse'. We wish her luck for her first season as a skipper and hope that plenty of anglers will book up with her...... 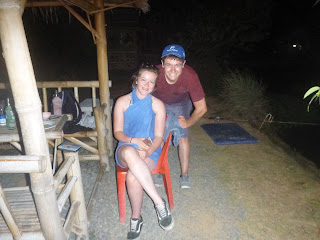 Here's Weymouth's young skippers, Ryan and Katie and it has been a great pleasure having them come to stay with us for their two week Phuket holiday. 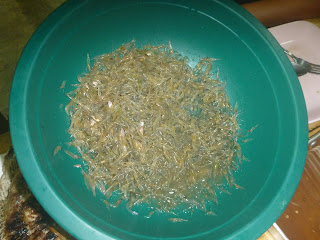 Right at the end of the session, Kannika scooped out a load of tiny freshwater prawns and announced that she would not be accompanying us to the nearest hostelry for a well earned cooling beverage. It was her intention to help her two Thai lady friends eat these little critters along with lashing of chillies and fish sauce.

Thailand is certainly a bountiful land!!
Posted by Offshore Rebel Fishing Adventures in Thailand at 19:34