A slice of 'real Thailand' Part 2. 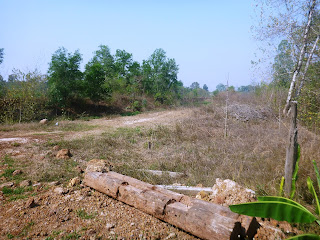 Kannika and I flew up to Udon Thani for a little change of scenery. The first thing to say is that internal flights in Thailand are cheap...far cheaper and quicker than using buses, mini buses or, of course, taxis. If you come to stay at my house for a 'Thai Holiday' then it would be nice for you, if you have time, to jump on a plane and go to a completely different part of Thailand to see how different it is from Phuket. The North of Thailand is very different from the south.....if fact Thai's from the south often cannot understand what someone from the North of the country is saying, such is the variation in dialect, accent and even actual words. 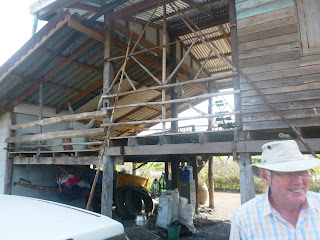 A jolly fine friend of mine, just seen in the right hand corner of the photo, recently moved from the estate where I live to a small village about 20 kilometers to the east of Udon Thani which is the fourth biggest City in Thailand. He kept inviting me to come and see how different the lifestyle is....and so, an opportunity arose and here we are. 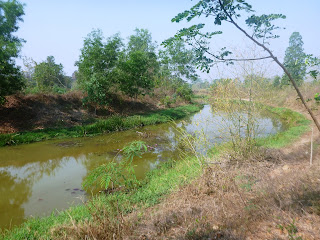 My friend David is married to a Thai lady who comes from this particular village. Like many such villages, the main income is farming (rice) and most people are pretty poor...and seem destined to remain so.

But, as is often the case, the people in the village were a lot more friendlier than here in Phuket where everyone is hurtling around in the pursuit of money and the Western Tourist is often regarded as a target to be exploited.

I have to say that without the help of a Thai partner, everything would cost a good deal more for me! 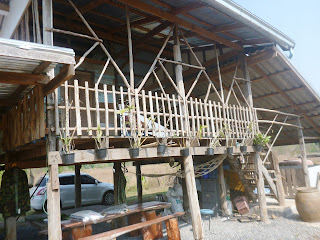 David's wife is called Gai. Gai's family own quite a bit of land scattered around this village.

Gai's father likes to live on his own now. We went to see his house that he built and the land he lives on. He ha no electricity...he doesn't want any....and he lives a peaceful life which is very much in harmony with nature. He gets up just before dawn breaks and goes to bed early. (It is dark in Thailand by 7 pm). He has no TV and prefers to listen to the radio in the evening before sleeping. 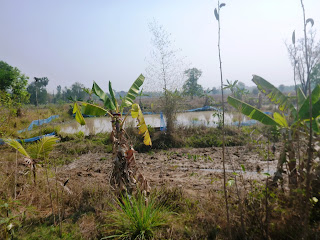 Here is a rice PADI field prior to planting. Much of the area is very flat with few trees and not much greenery at this time of the year....but soon the rainy season will arrive (next month, April) and the landscape will change becoming a brilliant green in colour as the fields burst into life with rice starting to grow.

There's a small pond in the background....and it's full of fish. 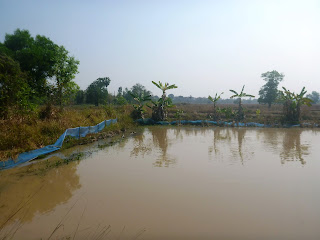 Fishing takes place strictly for food. The fish are mainly catfish and tilapia....and even though there are loads of them in this small areas, I am assured they are very clever and difficult to catch. Yeah...well...I'm sure some of you anglers would prove this theory to be wrong!! 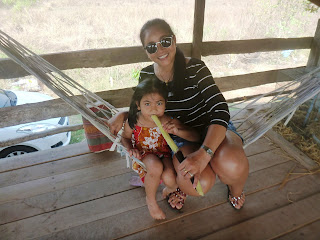 Thais seem quite happy for other family members to bring up their children which frees them to go to work. Gai is now the proud Grandmother of this little sweetie called Akeelaa. David, now a 'Grandpa in law' dotes on her. Kannika loves kids and was delighted to give little Akeelaa some of her time. This was a real look into how the extended Thai family lives its life together....it was all very normal and very different from what has to be described as the 'Insanity of Phuket'.

Little Akeelaa is chewing on a bit of sugar cane that Kannika chopped down and prepared for her. 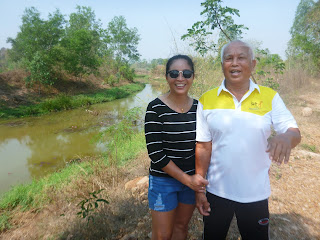 And here is Khun Jerel, father of Gai, who lives here. That makes David his son-in-law which is quite amusing s David is older than him.

Aaahhh...such are the complexities of families, eh??

We enjoyed a family dinner with four of Gai's six sisters and their families and thier children. Crikey....it is ALL about family here once you move out into the country. 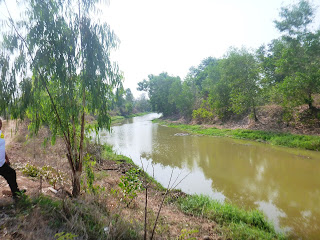 Khun Jerel lives right by this little river which is massively higher in the rainy season and is the reason why Thai houses are built on 'stilts'.

The river has fish in it and is punctuated by the bright pink colours of the water lilies growing in various places along its banks and in the shallows in the middle. 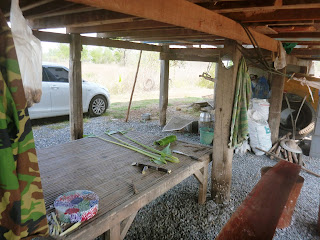 Jerel spends much of the day working under his house. The stilts lift the accommodation up and away from any potential flooding as well as snakes and any other naughty things that might like to bite the real country dweller.

It offers a spacious and shaded work area which is not too far from home. Often animals are kept here especially chickens. 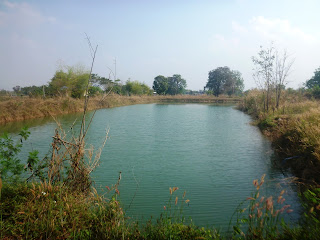 Jerel has a bigger lake for bigger fish!! These are for market....and offer an income along with the sugar, rice, bananas, mint, chillies, garlic and other spices that he grows and sells. He does all the work by himself and on his own.

He is indeed a fiercely independent man although every morning he visits his daughter for breakfast and is long gone by the time his son-in-law manages to arise!! 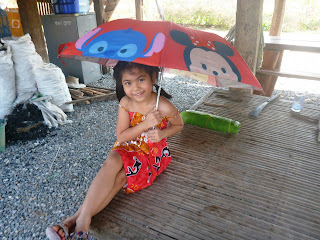 And here is a picture of charming little Akeelaa...who is just three years old and can already speak Thai very well. I have been learning Thai now for over 10 years and I am still hopeless at it. So, you can see how clever Thai children are at languages. 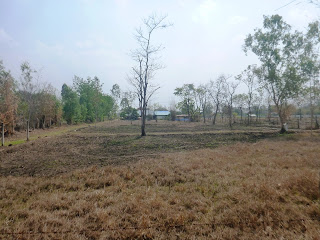 On the night before we left we attended the annual village fair at the village temple. Wow...Thai's REALLY know how to party. Event started in the afternoon and then, at about 2100, the entertainment started. Two massive stages had been erected with a seriously BIG PA system installed and the music took off. It went on until 0600 the next morning. Everyone was there! What an amazing party for everyone to ejoy.

Before the bands started up the gathering audience were treated to a sever rollocking by the village elders (13 of them) and the Village Headman. I mean...it was a SERIOUS bollocking.

I asked Kannika what it was all about and she explained that the elders were warning the people that if they dared to get drunk and started fighting their life wouldn't be worth living for the next year. Any drunken brawling was to be done outside the Temple Grounds....anyone scrapping inside the Temple area would suffer a lifetime of torment in Hell and there were lot of full size depictions of Hell in the Temple's artwork...and it didn't look nice.

Mmmmm...family life...within an extremely strict code of behaviour with the Head Hochos keeping a firm eye on you!!! Ah...those were the days... 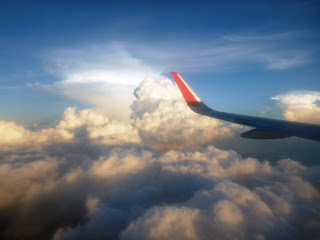 After such a traumatic reading of the riot act, I was glad to get on the plane and head south back towards the drunken jollity of Phuket.

Posted by Offshore Rebel Fishing Adventures in Thailand at 23:37