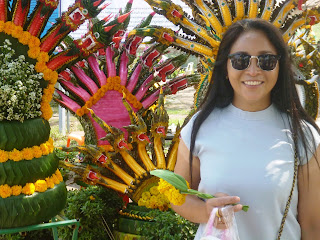 A good deal of Thai culture and colour has migrated eastwards from India. Buddhism is interwoven with Hinduism, mysticism, spiritualism and animalism.....

Every action you make, every step you take, every gesture of kindness or its opposite you make...is all part of the great intricate tapestry of this colourful, complex, contradictory, unfathomable culture of Thailand. 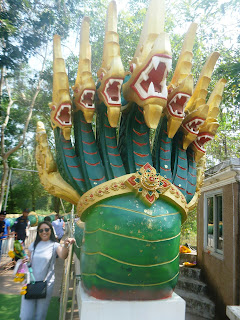 We were visiting the Kham Chanot Temple which is about 100 kilometres north east of Udon Thani, the fourth largest Thai City.

This is a temple dedicated to and dominated by Nagas.

What is a Naga other than a type of chili?

There are three main Hindu gods. Vishnu, Brahma and Shiva. Vishnu rides on a Garuda as his means of transport. A Garuda is a winged creature that has characteristics of an eagle, enormous talongs and is BIG!!

Garudas hate Nagas. They are always fighting. Nagas are serpent like creatures...they too are BIG! The King of the Nagas has seven heads and guards the Buddha. (If you are born on a Saturday, your protective spirit will be the seven headed Naga). The Buddha is often sitting on a coiled Naga.

Nagas guard all the Temples are are seen on stairways leading into the Temples. They like water and live in lakes and rivers. The gods and demons used a giant Naga in a tug of war to churn up the ocean and create the Sea of Milk from which all the planets and everything in the universe emanated....so..you can see that they are pretty important!! 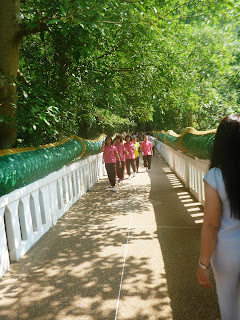 This is the walkway to the Temple. it is very small but set amidst densely packed trees.  The long bodies of two Nagas can be seen either side of the walkway on top of the white wall. 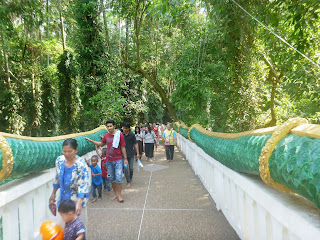 This is a very popular temple. Apparently it is often so crowded that you cannot move. I was dreading it...but fortunately it wasn't as busy as we thought it might be...probably because we came on a Friday as opposed to the weekend. 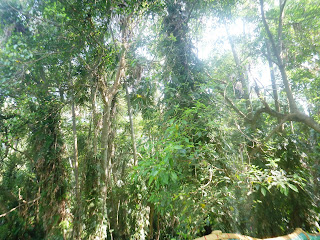 It's lovely and shaded at the end of the walkway with several small temple buildings spread under the tree canopy. A good photographer would have a wonderful time here with the natural play of light coming through the trees. 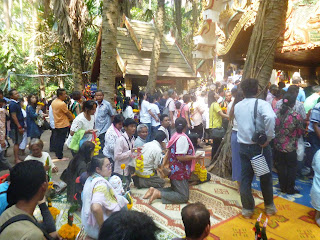 Thai people love going to the temple. Thailand is like a gigantic family; they address each other in family terms such as sister, uncle, father etc even when they have never met before.

There is a wonderful sense of community and it is heartwarming to see so many people chanting together and sharing in their beliefs in such an open and friendly way. You can see that Thai people are proud of their 'religious' culture although many would argue that Buddhism is a Philosophy and not a religion. 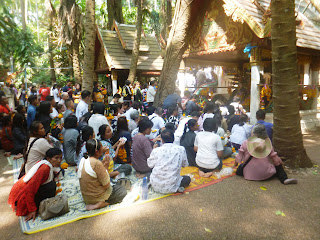 Whatever it is, it certainly brings people together. To visit Thailand and not visit the temples and watch Thai people making their offerings and prayers would be to miss out on what binds this country together.

Yes...there are so many apparent contradictions to the western eye...but that's what travelling to another country is all about...to observe and marvel at other cultures. We might be able to understand little bits of what is going on and the more one visits here the more of the complex jigsaw appears to fit together.


And now we shift from the offerings of flowers, fruits, eggs, Nagas etc etc and get down to the fun side of what the Temple is about. This is a temple that will reveal the National lottery numbers! As we know, the Chinese love to have a wager or two. The Chinese have a massive influence on Thailand and have passed on their love of gambling to their descendants, the Thai. The tree roots (shown below) can reveal the National Lotto numbers!! Powder must be rubbed into the roots and low and behold, numbers will appear and will be seen only by the person doing the rubbing!! 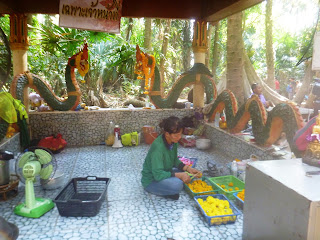 Here is a lady artisan making the Nagas. There must be hundreds offered every day. They range in price from pence up to serious toot. The more you spend, the more money is 'donated' to the temple and hence the more merit the purchaser will accrue. It's important to obtain merit so that you come back in the next life as something worthwhile rather than a mosquito or something equivalent. Of course, you may not come back to this earth or reality but to a higher (or lower) level...and there are MANY different levels of existence some of which last for thousands of years. All this continuous 'birth and rebirth' leads towards the highest of all levels...unbound by existence as we know it; pure energy. 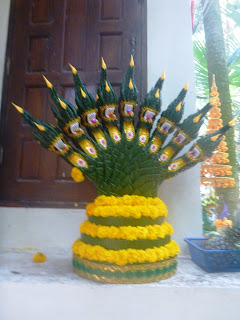 Here is a typical Naga decoration as created by the talented lady above. 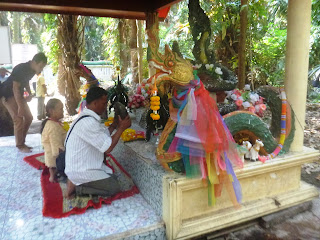 There are other ways to check on the progress of your luck in general or maybe even a specific  business project.  A bit hard to see, I know but the gentleman in the photo has posed a question and follows it with the desire for a Yes or No response as to the chance of its success.

The higher the stone he is lifting can be lifted the more positive the response. There are two stones. They are pretty heavy. The elderly lady to the burly gentleman's left couldn't budge hers...so I imagine men get a lot more of the positive answer they seek. If the stone cannot be lifted then the answer is an emphatic 'No'!! 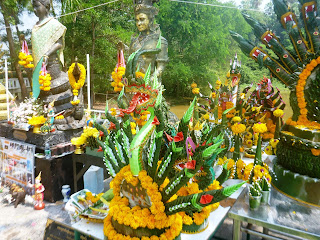 Kannika and I offered a flower each, a little packet of some food, a mini naga and a small rosary. We are unlikely to gain  much merit from our paltry offer.

Here on a table is one family's offering...it's pretty big. The most lavish offerings are made by the Chinese....the Thais don't have the money! 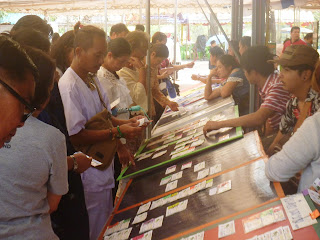 And, before leaving the Temple grounds, the all important part of the visit must be completed. Buying the Lotto ticket which is drawn every week on a Friday. It will be noticed how few are left....and none of them had a 7, 8 or 9 on them!! 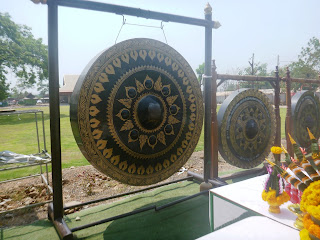 These gongs set up a hypnotic drone when stroked in the correct way. I have heard some pretty impressive sounds coming from them and it seems that the ladies with their gentle caressing can stir up the best responses from the gongs.

I am really consistent. I have stroked gongs all over Thailand and I have NEVER managed to get even a whimper from any of them...and that is despite observing many successful  techniques from different parts of the country. 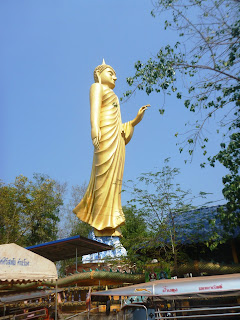 And finally....yes, there is a Buddha looking over everything to remind us all what the Temple is for...

This was a great visit.

I did not see even one other 'Westerner' there...it was all Thais, Chinese and a few Koreans.

This was definitely a place to people watch as it was by observing their behaviour that the mysteries of this particular temple were revealed.

Another piece of the complicated jigsaw fell into place!
Posted by Offshore Rebel Fishing Adventures in Thailand at 03:15