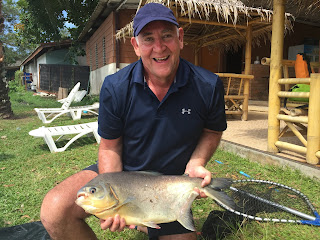 Taking the house for a week are Paul and Gillian Levy, Black Cab Taxi Company owners from London and their friends Tony and Michelle Perkins from Sheffield.

With the ladies off enjoying exploring the local beaches, the gentlemen sallied forth to endure a day on the fish....and what a day.....with fish on from the very first moment of the bread bait hitting the water. 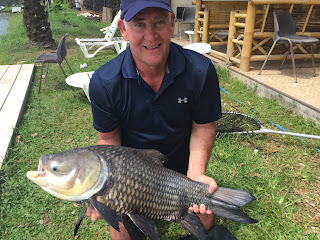 Although a bit breezy we opted for float fishing setting the baits very shallow to avoid the multitude of walking catfish that inhabit this particular water.
Here's Tony with the first of the day's pacu which more than impressed him with its amazing fighting ability. These are seriously exciting fish.
Tony was the one to impress right from the off as after several pacu he then tempted this very nice Siamese carp. Again, the power of this species made for a number of very lengthy and powerful runs across the lake. 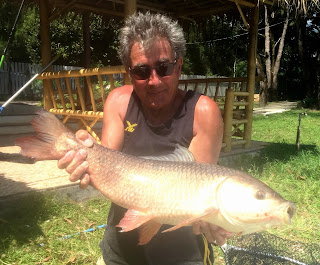 Whittall of Weymouth opted for the prettier species catching a brightly coloured Indian carp. This species is nowhere near as tenacious as the pacu of Siamese carp but can provide a much more acrobatic display leaping clear of the water when first taking the bait. After this initial outburst of energy, the Indian carp tends to give a steadier 'pull' of a fight preferring to stay deep and then coming to the net fairly easily. 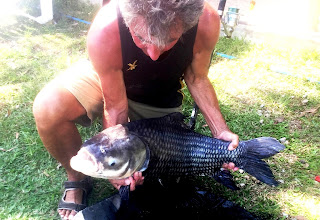 But on a day when all the species were obliging, even Whittall managed a small Siamese carp. 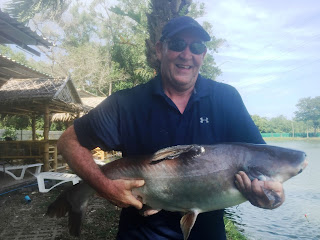 Here's Tony Perkins again with a Mekong catfish....not big by any means in comparison to some of the ones we have seen this season but very welcome on a day of variety and plenty. 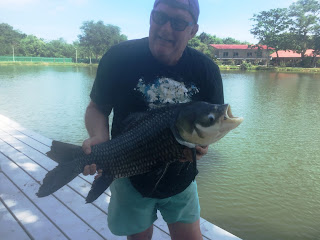 And another (bigger!) Siamese carp for Paul Levy this time....


The two friends were certainly enjoying a day of non-stop action. It was so busy that we needed to limit ourselves to one rod each and dared not put them down for a moment for fear of them being pulled into the lake. 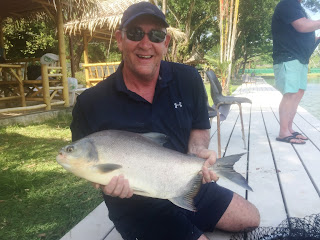 We lost count of the pacu......really great fishing.
Here's Tony with another of the lake's hardest scrappers. 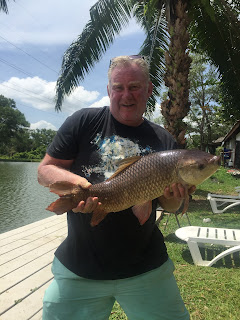 Not to be outdone by Whittall's earlier flirtation with the more exotic species, Paul Levy also managed to tempt an Indian carp. 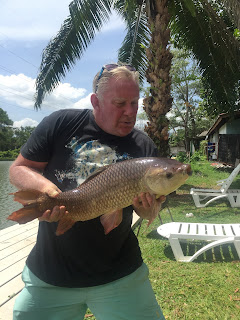 He's clearly impressed with this species...looks like a developing love affair.... 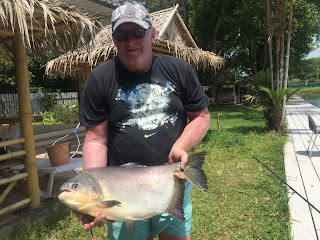 Paul with a lively pacu. By now we had switched to chicken baits in case a redtail catfish might have been around....but the other species were feeding so hard that the less numerous redtails didn't get a look in. 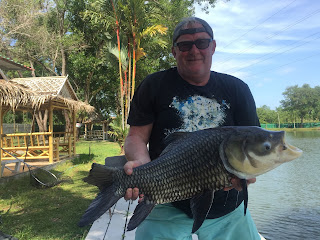 And here's another nice Siamese carp for Paul ...taken on chicken!! 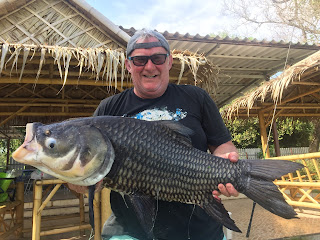 Best carp of the day fell to Paul Levy ....we estimated this fine fish to be 35lb to 40lb......it was certainly big and fat and took a looonnnggg time to coax to the net!! 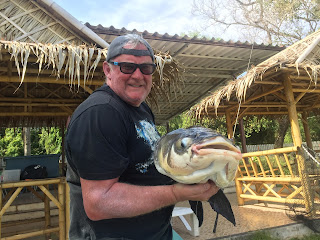 This picture shows the massive mouth of these Siamese carp. They certainly are a very impressive fish.


What a great day for us......it really was 'fish on' from start to finish. Amazing Thailand indeed.

We all caught and landed well into double figures of fish with plenty of our barbless hooks thrown during lengthy fights.
Posted by Offshore Rebel Fishing Adventures in Thailand at 02:23