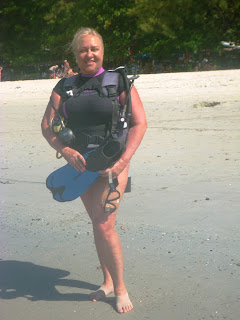 Gillian Levy, London Black Cab Cab Company boss, struts her pre-dive stuff on Kata strand for all to see. Russian ladies were seen simpering up to her to ask how she was able to do this 'brave diving stuff' and Thai boatmen stared at her equipment in awe. 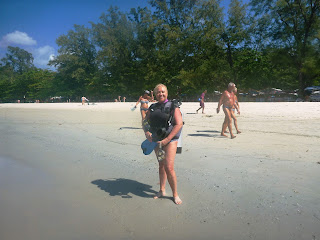 The beach at Kata is certainly a good deal quieter since the introduction of new laws over the last three years. The beach was previously covered in sunbeds and there was the feeling that the beach was owned by these operators as opposed to being a public area for all to enjoy.

There is a continuing debate about this and sunbeds etc have been allowed back on the beach in limited areas. How do you feel about such an issue? I do see many elderly holiday makers struggling to get up off their towels laid on the beach and, without the sunshades,  there are certainly a lot more sunburned people around. 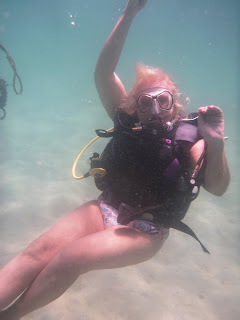 Anyhow....getting sunburned is not something that concerns us. Here's Gill getting ready to let go of the surface line for the very first time....will she do it?? 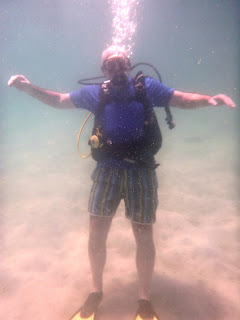 Meanwhile our retired Yorkshire Dectective, Tony Perkins is already on the bottom and directing traffic at a crime scene, awaiting out later arrival. 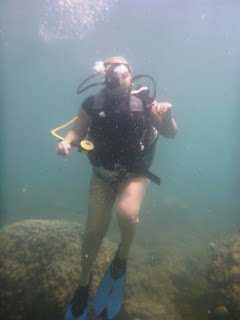 And yes, we're off. Everyone has thier own unique opening style. As can be seen above, Tony is a man who likes to take control of a situation whilst Gillian, a keen keep fit gal, sets off on a power walk.

I can see the need for further explanation as to the complexities of diving!! 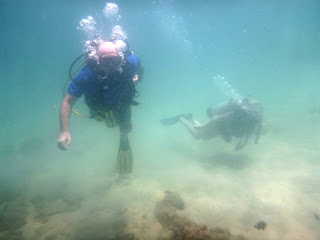 But now, a nice horizontal profile as practiced in our pool has been adopted and we are off with Tony leading the way and Gill lagging behind seeing if anyone's dropped any coinage that might be of future use at a local hostelry. 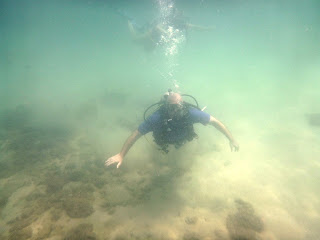 Tony soon developed an open armed underwater flying technique.....and was maneuvering skilfully around the first rocks at the start of the Kata reef. 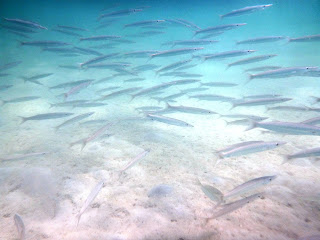 We were very fortunate with lovely visibility....and we were soon joined by an accompanying shoal of barracuda.

The sea was sparkling clear with wonderful colours to enjoy. 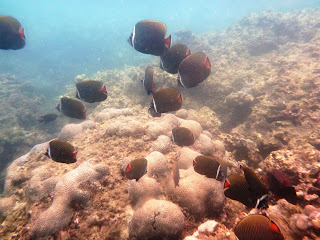 Re- tailed butterfly fish are a feature of the Kata reef and tend to hang around one particular section of coral. 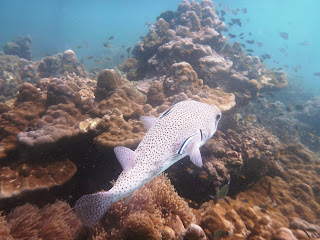 Solitary giant puffer fish, often accompanied by a cleaner fish or a remora, are the biggest fish that we usually see although on rare occasions something larger like a golden trevelly will come belting past. 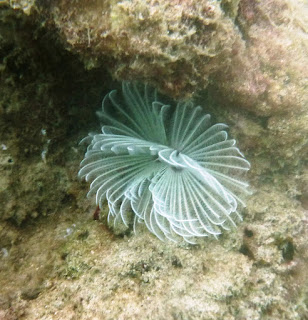 Everywhere around the reef are these fragile white fanworms...disturb them and they retract immediately into their tube. 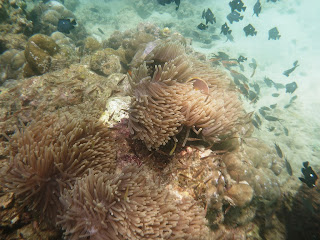 When the visibility is good, the diver can see how packed with life the reef is. There is movement and colour everywhere with so many different species of fish that it is an overwhelming visual feast. 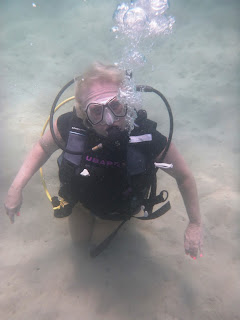 Gillian was very good on her air consumption with her first ever dive being 61 minutes and still had half a tank of air left...excellent. The warm water with good visibility and so much to see takes the new diver's mind off their breathing and it is not long before the diver starts to relax and can enjoy all that is on offer to be experienced.

The first dive is always a  wonderful experience. 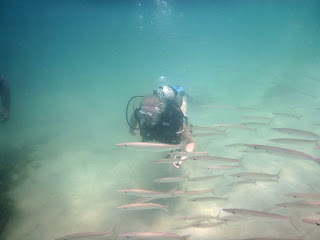 Gill gently finning through the shoal (or is it school?) of small barracuda. Contrary to whatever one may think, these barracuda are competently harmless and will allow the careful diver to come very close to them without scattering. 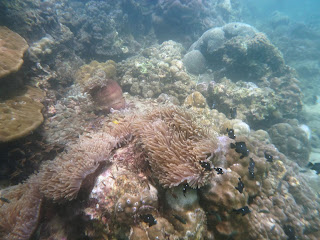 Anemones and hard corals present a vivid contrast of textures in the underwater world. 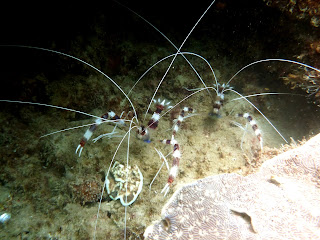 On a previous dive, Kannika found an area where these shrimps are currently living. Once again they were there and obliged by coming out of their protection to pose for photo's....the creatures on this reef are amazingly obliging!

And so, another great dive is over.

Our two couples are only here with us for a week (they had already been to Mike Bailey's Exotic Fishing Thailand in Phang Gna before venturing southwards into Phuket) and we have already run out of time for anymore diving. Today they are off on the famous John Gray sea kayaking tour and tomorrow is their final day before heading off for a further week's adventures in Koh Samui.

Gillian is hooked on the diving now and is promising to join her local dive club back home and work on her diving certification. She will leave the sea dives until she returns here next year but aims to complete all the theory and closed water (swimming pool learning dives).

And....they have already booked to return to Phuket and stay with Kannika and myself for two weeks next time.....
Posted by Offshore Rebel Fishing Adventures in Thailand at 21:22