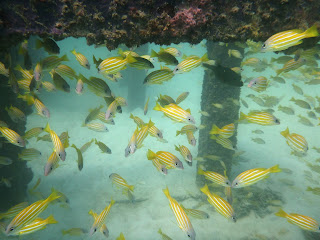 What a fantastic dive today!!!!  And really happy that Kannika was able to share it with me as she was advised not to dive after laser eye surgery in November. But now she has been given the all-clear and we are back in action.

Some days with fishing, everything goes right....and similarly in diving. Today everything was perfect. We surface 'swam' a good 400 metres out and then dropped using land marks and compass bearings to hit our 'start point'. From there exactly 100 'cycle kicks' over a 4 minute time run on a bearing of 200 degrees and we arrived bang on our mark...hurrah!!! And the viz was superb with stacks of fish everywhere and with a water temperatures of 29 degrees Celsius, it was.....Heaven! 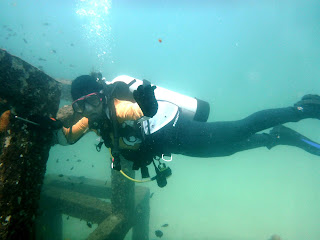 We were aiming for one of the clusters of concrete blocks that the Thai Gov have been depositing around the Islands to encourage coral growth and fish life....We didn't see much new coral growing but they certainly attracted the fish as can be seen in the photo above. It is very rare to see a big fish when diving from the shore around Phuket...which is why we don't bother hiring a long tail boat for evening fishing trips like we used to....but the amount of small fish with their vivid displays of colour and the amazing variety of species more than compensates for size. 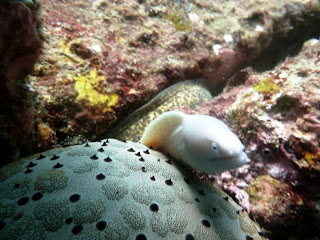 The cracks between the blocks were full of baby moray eels....far too many to count. And they were very friendly and inquisitive....leaving their shelter and coming out to greet us. 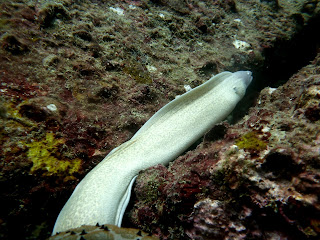 As with the fish, there seems an endless variety of moray eel species....

We were lucky (it WAS a lucky day) that we were diving at low tide and so were only at 10 meters. This gave us plenty of natural light for our photography and a good 45 minutes before we headed back to the nearby reef at just 6 meters giving us another 30 minutes of diving. I am very fortunate with Kannika as she uses very little air and our dives have always been lengthy. Diving in very warm water also helps air consumption as does a gentle approach to the dive. 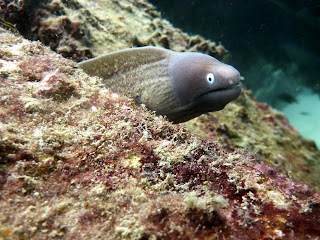 It turned out to be very much a moray eel adventure dive....and they were very accommodating as regards posing for photo's. 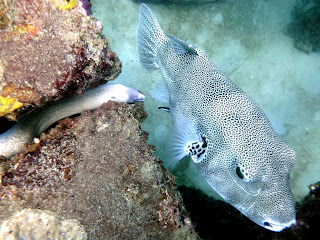 Here's a giant puffer fish. There's a little cleaner fish in the picture just in front of the baby moray eel's head. The moray eel was also joining in the cleaning of the Puffer...taking parasites or whatever from its gills. It was quite a thing to watch.... 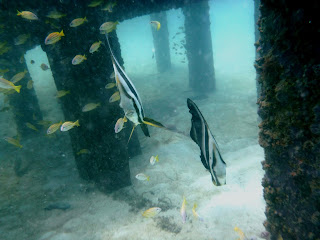 We saw plenty of batfish and they came right up to us. It just shows if you are very gentle the fish will come to you. 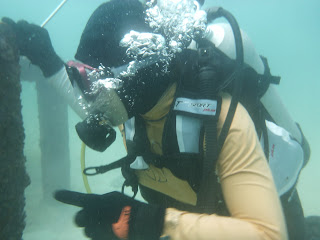 Just look how clear it was at 10 meters! Fantastic, eh? 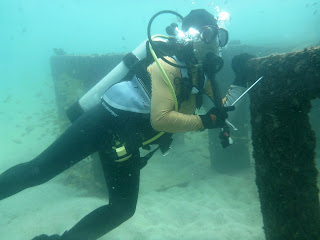 Kannika has always had a hankering to be an orchestral conductor...thus the presence of her silvery baton. 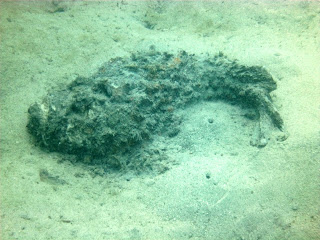 And here we have a real, genuine stone fish...described as 'venomous, dangerous and even fatal to humans. it is one of the most venomous fish known'.

Laying out on open sand, it would indeed be very easy to mistake it for a stone. You don't want to go near this bugger...even with a shiny baton to protect you. PADI encourages divers to look and never touch....and here is a very good reason why to heed that advice. 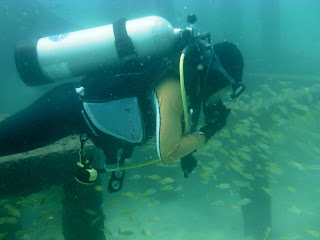 We are now heading away from the blocks after an overload of fish life....really superb. On our way back across white sand to the main reef we saw several blue spotted sting ray. Many guests staying have been treated to seeing fair numbers of these....they are localized and often very numerous. 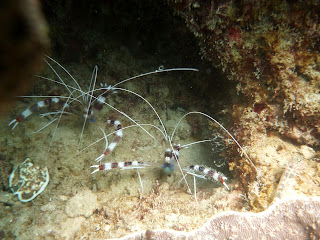 We still had air enough for a 30 minute bimble along the coral reef to enjoy and it was great to have Kannika back with me as she sees everything. Here she notices the tell-tale giveaway sign of the white antenna of shrimps. Gently tapping the nearby coral encourages shrimps to come out and take a look. These two were just as obliging as the little moray eels and allowed me to get stacks of shots in. As we finally backed away, they returned to their shelter. And I am thinking...what IS going on??? Everything is being SO obliging today.


We passed through what was literally thousands and thousands of fish I reckon were maybe 3'' long in the longest and most dense shoal I have experienced in my 15 years of diving at Kata. There were so many fish the whole area was 'blacked out'. My photo's show nothing! Just....blackness...!! 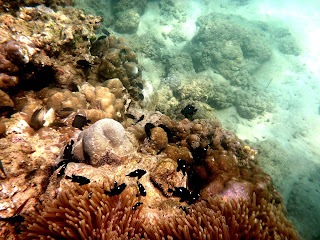 And then to break clear of this shoal, swim through a heap of needles barracuda and into the bright light of just 3 metres deep for what I though would be our final anemone/fish display of the dive......but no...there was one more wonderful surprise to come.... 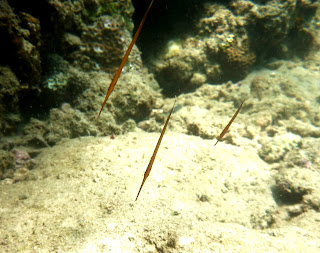 ....and here...just before we surfaced...a group of three coral shrimpfish. We do see these sometimes but it's the first time for me this year because the visibility has been so poor.

So, yes...this really was a dive with everything. 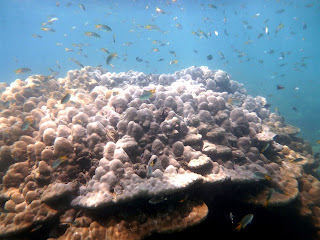 A nice head of coral as I headed towards the surface....with Kannika not wanting to leave... 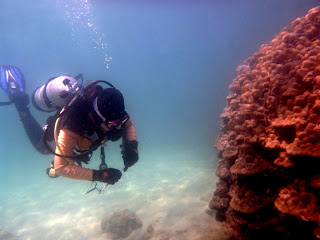 ...and a final parting shot as Kannika finally gave in and reluctantly that even she couldn't stay down with an empty tank!

This is what I came to Phuket for....the diving....and how great to see it at its best today.
Posted by Offshore Rebel Fishing Adventures in Thailand at 03:25