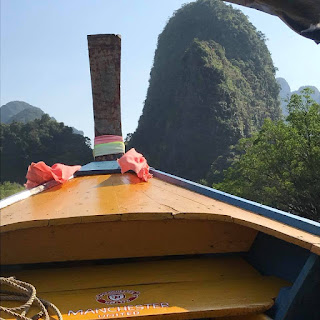 Heading North from Phuket we, (myself, Paul Cross and my delightful Michelle; Old Scroat Whittall and the the Glamorous Kannika)  entered the Phang Gna region, the land of the Elephant Tusk.

It was our plan visit a large cave system and then hire a longtail boat for a trip in amongst the marine scenery where the James Bond film 'The Man with the Golden Gun' was shot. 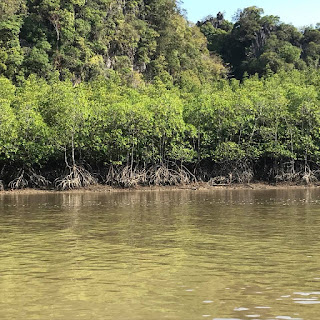 Firstly we travelled through the mangroves to reach  Phang Gna Bay. Because we had hired a car, we were able to take boats from quiet, non-touristy locations. This meant the prices were much better (£35 total to hire the longtail boat for just the four of us) and were able to persuade the Captain to take us to where we wanted to go and heave to (like the Nautical terminology?) at locations that interested us. 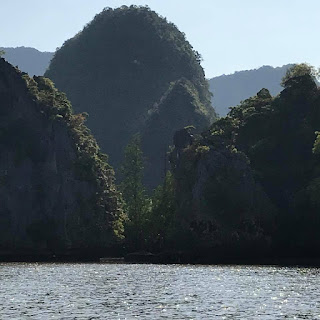 Phang Nga Bay is home to 'James Bond Island'  is a place that is so very different from the 'normal' seascape one encounters that it will definitely imprint itself on the memory and will always be remembered. 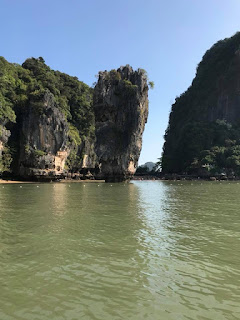 This is the island that was used in the 1974 James Bond film 'The Man With the Golden Gun' starring Roger Moore.

This has its drawbacks as there were many tourists on the actual small island so we did not go ashore. Our Captain took us gently right around the island allowing us to view and photograph it from the sea. 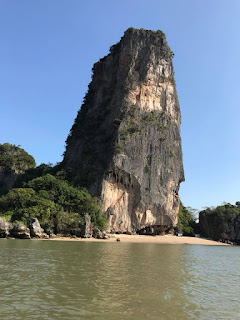 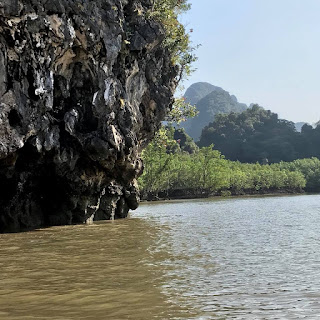 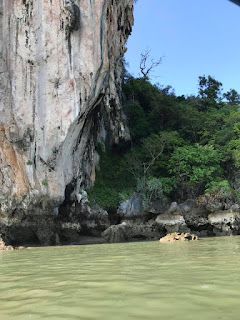 The effects of erosion can be seen on the Karst (sea mountains) with very jagged indentations and a sharp, rocky surface. There were plenty of crabs on the waterline with these formations offering perfect protection for them.
These are very wild and different 'coastal' scenes from our own gentle Dorset coastline.

The sea is a green colour due to the constant erosion of the limestone formations. It's certainly not a place to try snorkling....and we did not see any fishing taking place...although that's not to say there are no fish here...just did not see any locals trying for them. No doubt it's a more lucrative use of the boats in the High Season to take tourists out for a ride. 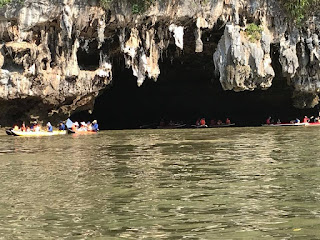 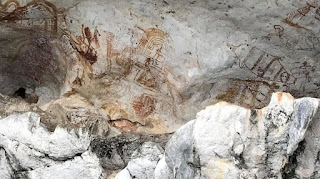 Thanks to Paul Whittall , Michelle And Ganniker For A Great Birthday Trip

Posted by Offshore Rebel Fishing Adventures in Thailand at 05:12