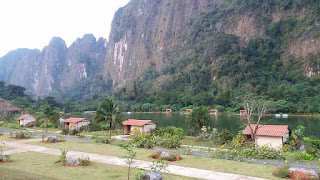 The splendid view looking over the fishing lake from the newly built 5* bungalows. The bungalows are beautifully equipped with Thai style decoration....and a fully stocked fridge!

NB. The weights of these fish are estimated by the guides. Anglers must go into the lake in order to present their fish for photo's; the big fish are supported by rather than lifted clear of the water. 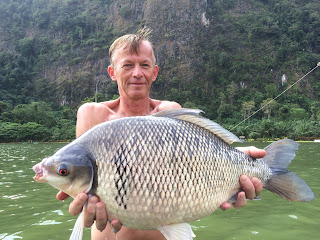 Mark Butland presents a Bony Lipped Barb of around 5kg. The current World Record (IGFA rated) is 3.5kg...but IGFA (International Game Fishing Association) do not recognize claims from Thailand's lakes....for a variety of reasons. Thus Mark will not be able to lay claim to such a lofty achievement as officially breaking the record......but...unofficially...he knows! 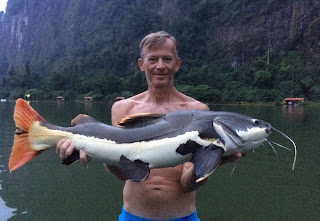 The Red Tail Catfish is the most spectacularly coloured of the exotic fish ...and always looks great in a photo. This magnificent fish was estimated at around 20kg. 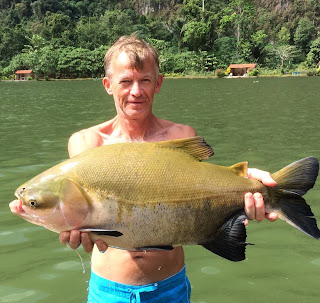 It's always great for an angler to add a new species to his catch list. This is the first Tambaqui Mark has ever caught.According to Wikipedia the Tambaqui is 'a large species of freshwater fish...native to tropical South America but kept in aquaculture and introduced elsewhere'. This specimen was estimated at around 5kg. 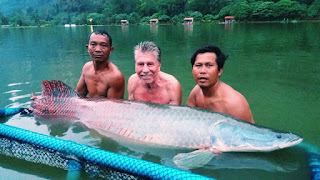 Dave Lovelock from Chippenham in Wiltshire presents a fabulous Arapaima weighing in at 120kg. 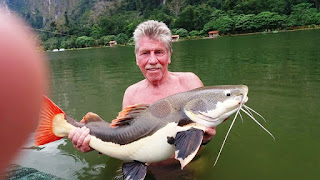 A fine Red-Tail Catfish and a Thai guide's thumb for David. 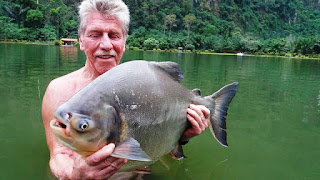 And the ever reliable pacu..... 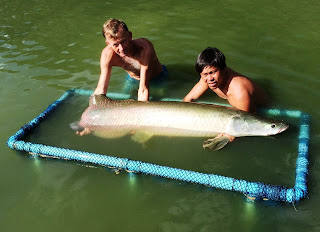 Mark Butland shows off his 60kg Arapaima which he described as making a number of unstoppable surges right across the lake. These are indeed extremely powerful beasts. 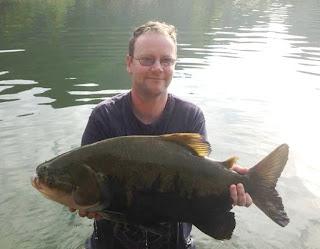 Richard Spracklen from Wool in Dorset also added a Tambaqui to his own list of species... 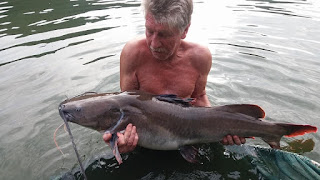 ..and here's Dave again with a Asian Catfish. The rather sluggish fighting qualities of this species is unlike its more active cousin, the Red Tail Catfish. 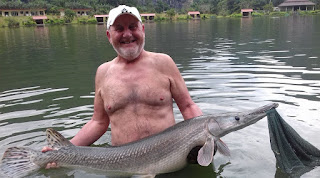 Art Powell from Calne, Wiltshire, touched down in Phuket airport late Tuesday evening and was taken straight to Exotic Fishing Thailand ready to fish the first day of his holiday. Art caught this fantastic Aligator Gar 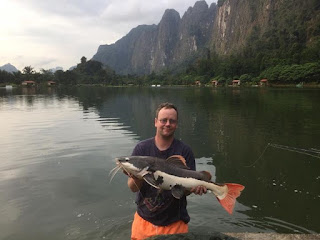 Richard with a Red-Tail and a very nice lake/mountain background to show the paradise the anglers enjoy when fishing in Phang Gna. 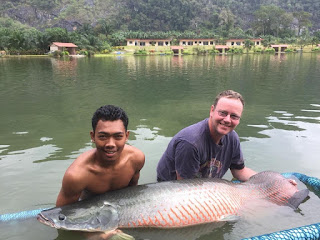 Richard was delighted to total 4 Arapaima in his four day stay.  These ranged in size from 40kg right up to 70kg with this fish presented here displaying the vivid colours that make the Arapaima such a special fish to catch. 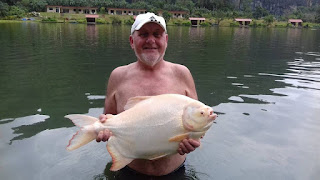 For Art, every different fish he catches here in Thailand will be a new species for him. Here's an Albino Pacu. 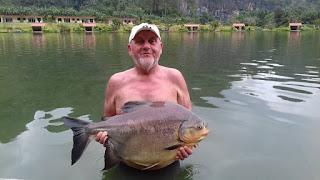 And this was followed by the common Pacu... 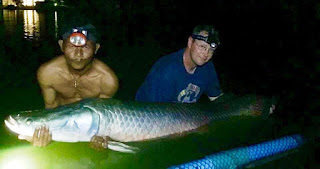 Here's a 50kg Arapaima for Richard. 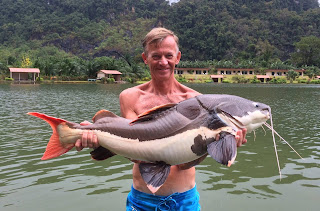 ...and another splendid Red Tail for Mark. 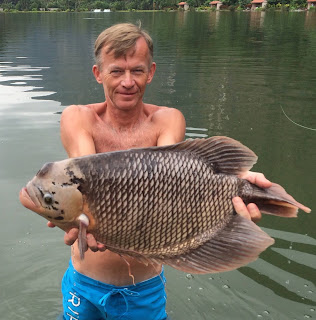 Here's a Giant Gourami which is native to south east Asia and is easily distinguished because of it unusual 'facial' markings. 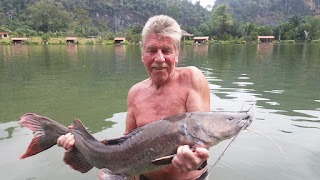 David with another Asian Catfish.... 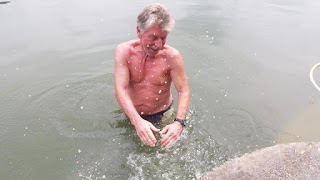 ...which rewarded him with a cooling splash on its release. 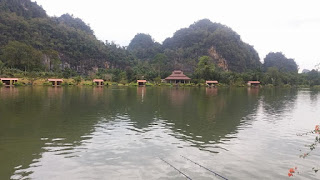 This is a view from the mountain side of the lake looking towards the restaurant and the newly build roomy fishing salas. 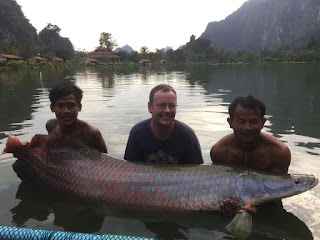 And here;s Richard Spracklen. After dropping three arapaimas on Day 3, he was fianlly rewarded with this outstanding 70kg (154lb) Arapaima.

It was a greath way to end the trip with both Richard and Mark landing 60kg arapaimas.

Posted by Offshore Rebel Fishing Adventures in Thailand at 21:38