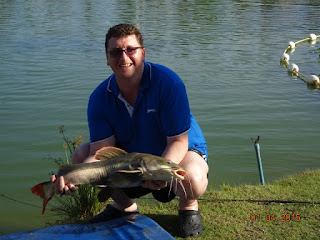 Jez Wilson has been very busy at his Chalong Fishing Park over the past week. There have been deliveries of Walking Catfish to add to his increasing stock and land is being cleared for future improvements.

Yesterday was like an Offshore Rebel reunion day with  angling customers who are staying in the Chalong area turning up to fish along with Jay and Claire Pullin rom Weymouth, Dorset, and Paul and Michelle Cross from Sheppey.

Here's Paul with one of the Walking Catfish. 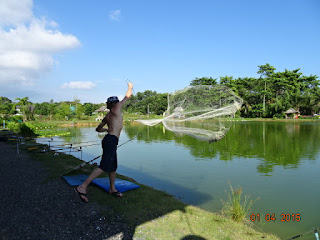 Offshore Rebel skipper Jay has made good friends with the Thai guides at the lake and chief guide, Khun Boy, spent time showing Jay how to master the difficult art of static net throwing. I'm sure many of you have seen this method of fishing taking place all over the world whilst on your own holidays...it IS difficult!! But, as can be seen from Michelle's excellent action picture, Jay was soon getting the hang of this and was the proud captor of a stack of freshwater shrimps! 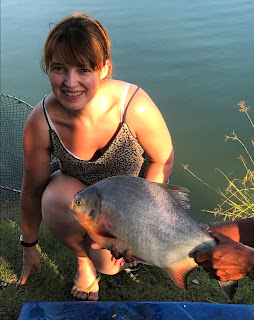 Michelle caught several pacu and red tail catfish.....here's one of her pacu. 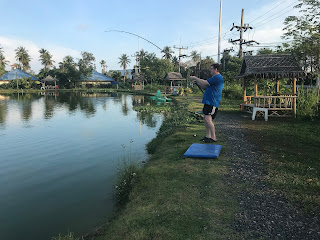 Paul was soon impressed with the power of these fish. Here he is playing a Mekong Catfish on the light tackle provided by Jez. The fight lasted a lengthy and hot 20 minutes with the Mekong weighing in the 30 kg region. 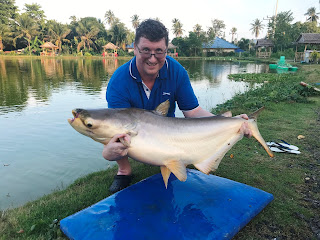 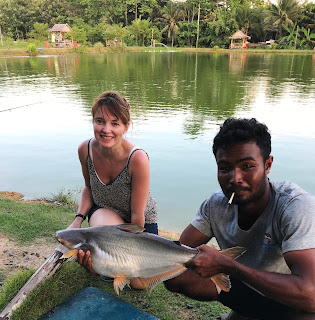 Michelle sensibly opted for smaller fish and had her own trained guide to present the fish for her. Well, a gal on her holiday doesn't need to get mucky when there are very willing assistants offering a professional hand! 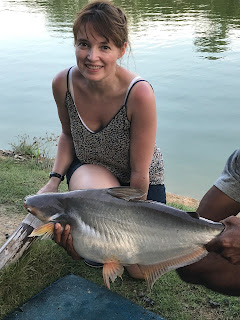 Michelle has a 'list' of what she hopes to see and do on this holiday. Catch some freshwater fish was one of them and she's already achieved a remarkable first with a scuba dive lasting over 70 minutes (she doesn't use any air...amazing!)

She and Paul have visited Phuket's China Town Centre, walked along several local beaches, visited the local temple and are now waiting for the mini bus to come to the house to collect them for the unmissable John Grey Sea Kayaking trip which will take them to the picturesque Phang Gna Bay and into the limestone Karst formations via the cave networks. Michelle has already told me that she loves exploring caves so this will be a very memorable trip. 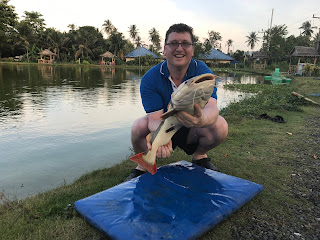 Paul was keen to catch a Red -Tail Catfish...and here he is one of the several landed.


On the anglers return to the house, our hostess Kannika had prepared a selection of Thai dishes for dinner..including the fabulous Massaman Curry.


Sadly, at 0600 this morning, the taxi arrived to take Jay and Claire back to Phuket airport to start their long journey home. Jay has left a marked impression on the Thai skippers and fishing guides he has met. He tried very hard to communicate with them and I have to say he was by far the most successful in doing so. The bond of the sea and fishing can unite people from different countries in friendship and understanding...and surely that's what it's all about!!