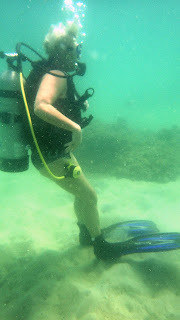 After  a good session in the house pool, Debbie decided 9as did I!) that she was ready to try her first ever sea dive using Scuba gear. We headed off to Kata Beach with fellow Weymouthian Jamie Pullin sporting his new Underwater Camera as keen to act as photographer for the dive.

We started as usual by swimming out 200 yards on our backs so that the nutters on the Jet Skis could see us (and avoid us??) more easily and the Thai longtail boat operators had a better target to aim for.

Once we had reached the reef rope, we were able to relax a bit before hanging on and allowing ourselves to sink whist still retaining an initially comforting hold on the rope. With ears sorted out and breathing under control, it was time for the very first drop to the seabed  be made. This is often accompanied by an equally swift return to the surface for a multitude of reasons...!! 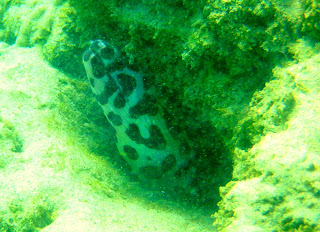 Once we'd settled down.after only 10 minutes or so....we found our first little moray eel hiding in a rock straight under us. Although shallow at just 4 metres in depth, the visibility was poor and made photography difficult....but Jamie persevered and took loads....so we were able to get a few together to remember Deb's first dive! 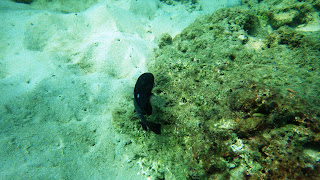 There were patches of clarity in which the bright white sand was able to illuminate the darker fish and highlight the reef.

The poorer the visibility, the more the fish life. Everywhere was teaming with the usual massive array of species associated with tropical waters. 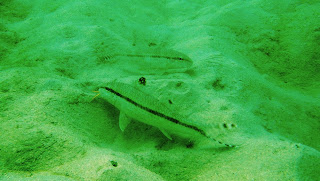 There's always plenty of goat fish grazing around...if the diver moves gently so as not to scare them the they will carry on feeding and allow close up photography. In the shallow water there is no need for flash so the fish remain calm and in position! 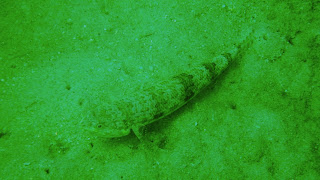 All sorts of gobies and blennies inhabit the sand along the edge of the rock and coral reef. 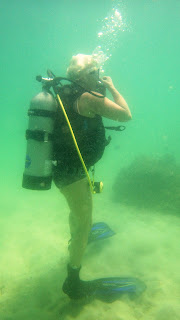 And, a similar shot to finish Deb's first dive. This dive lasted....68 minutes and Debbie came up with half a tank of air left. Debbie involves herself in a range of sporting activities including running and cycling and has rowed with the Weymouth gigs for 10 years. She is extremely fit and also mentally very strong. She was explaining to me afterwards that her standing pulse count is very low at 54 per minute which may be why her air usage is so low.

It's great meeting such talented and outstanding people and sharing, in this case, my love of diving with two friends, Jay and Debbie,  who have taken to it instantly.

May there be many more diving adventures to come!!!
Posted by Offshore Rebel Fishing Adventures in Thailand at 02:48