Bridge On the River Kwai and Hell's Pass. 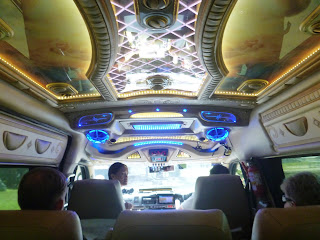 Our mini-bus, possibly the most ornate in all south-east Asia, picked us up from our hotel in Bangkok at 0630. We were heading north west into the Kanchanaburi Province to visit the area made famous in the 'Bridge on the River Kwai' film.

Apart from being a terrible film, the river is not even called the Kwai. 'Kwai' means buffalo and is a term Thais find insulting. It is actually called the 'Menam Kwaire'. (Pronounce like our English word 'air' with a Kw in front of it) 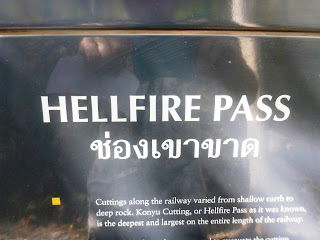 Hellfire Pass Memorial Museum :
This full day tour will take you to visit Hellfire Pass, The Bridge of River Kwai and war cemetery. 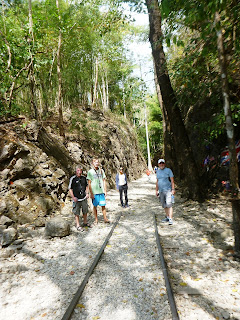 Hellfire Pass Memorial Museum : Hellfire Pass is a 500 metres long and 26 metres deep section of rock that was dug out by Prisoners of War intended to allow the Death Railway’ to continue its route from Bangkok to Rangoon. Soldiers were forced to remove the rock using no more than picks, hammers and their bare hands. Of the 1,000 Australian and British soldiers who took 12 weeks to clear the stretch of mountain, 700 died.

Here have (L to R) Dave, Mark, our Guide, Khun Air and Art standing at the start of the infamous Hell Fire Pass. 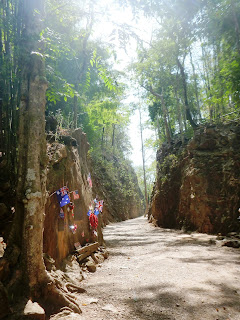 The Hellfire Pass Memorial and Memorial Museum were set up to commemorate these fallen. The memorial comprises a trail where visitors follow the old railway track into the jungle and a museum. The museum contains pictures and tools alongside video exhibitions and showing of documentaries about the events. Like elsewhere on this trail, the memorial and museum are extremely moving places.


Imagine cutting this out by hand whilst weak, injured and sick. 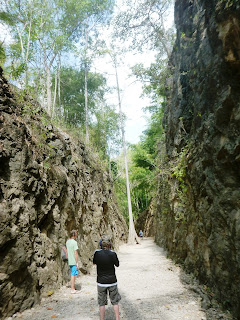 This site is of particular importance to Australians. The Australian-Thai Chamber of Commerce) supports the museum. Four hundred Australian prisoners began work at Hellfire Pass on Anzac Day in 1943 and the site plays and important part in annual Anzac events in Thailand.

Hammer and Chisel..the tools to cut through solid rock to allow the train through. 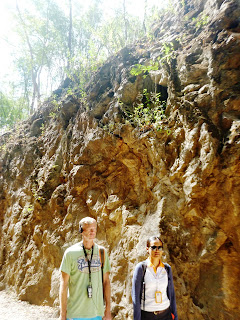 Our guide was called Khun Aire (bit of an uncanny co-incidence) and she was superb...as was Khun Thid our mini-bus driver. This was a fantastically well organised tour which included superb Thai food at various stages of the day.

I would say that this tour ranks alongside the John Grey Sea Kayaking Tour in Phuket....everything about is was thoughtfully constructed. It was both emotionally moving and informative.

The Hell Fire Pass museum is extremely well put together with excellent audio headsets provided with very clear units of information given. 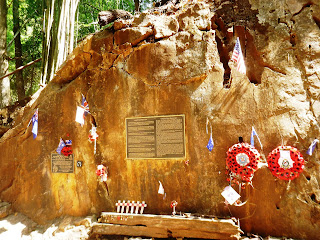 There are various places like this along the route..you cannot fail to be touched by the tributes paid to these men who suffered so much. 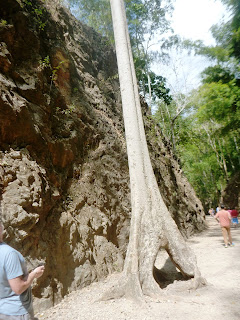 The Hellfire Pass was reclaimed by Nature after WW11 and 'lost'. Upon being 'rediscovered', an extensive restoration/clearance progamme was undertaken and the railway track area reopened.

Not every new tree could be removed. This tree had grown into the surrounding cutting and was considered to be best left alone for fear of causing collapse of the cutting. 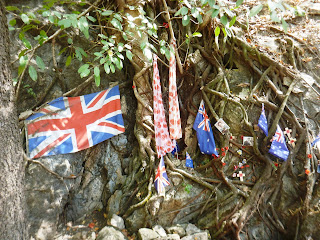 Memories do not fade. There must be many families who have links with this horrific episode of infamous brutality attributed to the Japanese and Korean guards.

An attempt to understand the Japanese Military philosophy towards surrender can be made in order to comprehend what happened here...but there can be no excuse for what is documented as unremitting brutality towards the Allied POW's and the hundreds of thousands of Asians who also suffered during the building of this railway...often referred to as The Death Railway. 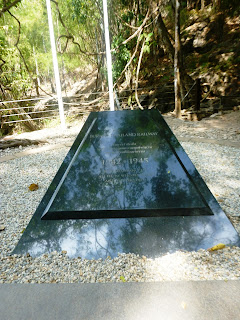 Memorials and regular remembrance services plus the sensitive upkeep of this section of the railroad ensures that the memories of the many who suffered here are kept alive. 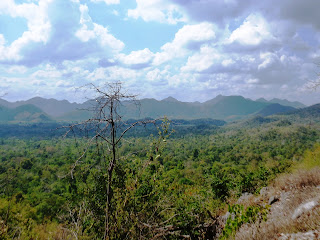 The audio documentary tells how some soldiers were able to find a degree of serenity in the contemplation of the beautiful natural surroundings.

In the distance are the mountains of Burma, now called Myanmar and a country which is currently in the World news with the  persecution and suffering of the Rohingyas  who have unrecognized status as a people. 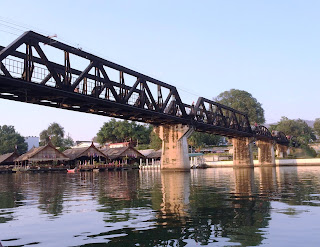 And here is the famous bridge. Trains still cross it and tours incorporate a train ride as part of the day. At least two days would be needed to do the tour we were on and the Bridge On the River Kwai tour with the train journey.

A good film to watch in order to get a sense of how people suffered here would be The Railway Man starring Colin Firth and Nicole Kidman as opposed to the famous 1957 film Bridge On The River Kwai starring Alec Guiness, William Holden and Jack Hawkins 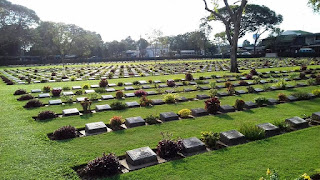 The War Cemetery at Kanchanaburi is immaculately cared for by the Commonwealth War Graves Commission. There are 6,858 identified casualties in this War Grave and whilst the quotations from the Bible on the plaques are moving it is the simple words from families and mothers in particular which are the most heartrending in their expression of undying love and loss. 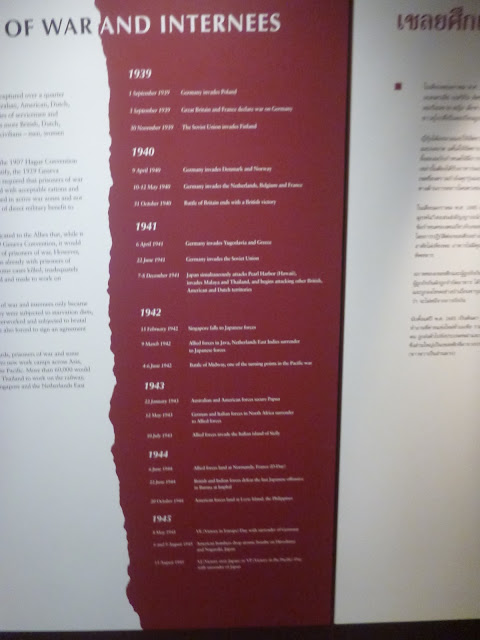 A few details from the Australian Hell's Pass museum.


Posted by Offshore Rebel Fishing Adventures in Thailand at 23:59