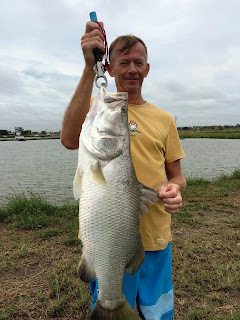 This is the description you will find if you Google 'Barramundi Fishing in Thailand-Fish Thailand'.

Be warned though; this 'venue' is extremely exposed to the elements....there is NO shelter. You will either be burnt to a frazzle or get soaked...so you MUST come prepared to handle the blistering sun or the hefty downpours.

The team were lucky as it was raining initially but then remained overcast. There are one or two large umbrellas to shelter under when having  a break or tackling up etc but when you are fishing you need to be careful.

Mark Butland (first picture) with an excellent barramundi.....they do look rather like bass!! 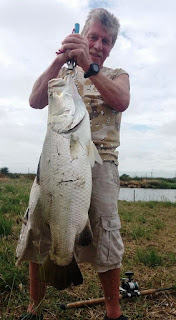 Thankfully a move to a different lake was made after trying the first  location...fortunate because of the size of the ants that were happily attacking the feet and legs of the anglers. The move was made because of the muddy and slippery conditions caused by the heavy downpour shortly after dawn.....and no-ne was complaining!

The ground around the second lake was much firmer and our men settled down to six hours of non- stop, totally manic fishing. The barramundi were certainly on the feed and attacking every and lure lure that was offered. They are incredibly powerful fish and can straighten and trash treble hooks for a pass time. They are able to perform spectacular acrobatics and leap completely clear of the water in true Game Fish style....this IS extremely exciting fishing.

Here's Davelock (left and below) with  two double figure barramundi. 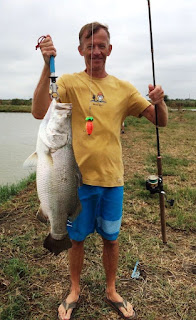 A range of lures was provided...but on this particular day it really didn't matter what was used. Surface poppers provided the best fun as the attack of the fish can be seen as it grabs the surface lure and leaps clear all in one go.

The fishing was so crazy that the team stared fishing without hooks on the lures! The fish still hung on and were able to let go as they neared the water's edge! What a perfect was to have maximum sport without having the final hassle of landing and unhooking.

The fish count was soon lost with estimates of up to 50 fish each...although many were deliberately 'lost' once the hooks were removed from the lures. 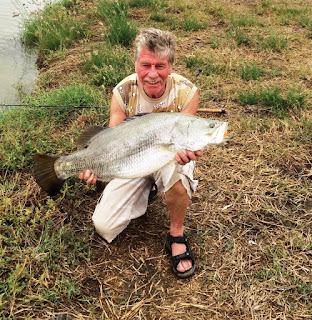 Dave has caught so many fish in his angling lifetime that he knows how to adopt the 'perfect pose' for every species.


For this trip, the taxi arrived at our hotel at 0730 and then made an 80km trip to the east of Bangkok. Snacks, drinks and guides were incuded as well as all the tackle...Shimano fixed spool reels loaded with 30 braidwhich is tied  to a 1.5 metre 70lb mono trace that really needed to be changed after every other fish. The barramundi are superb at leaping clear of the water and then landing on the leader. If they touch the leader with their double edged gill-rakers, the mono line is immediately scuffed up and weakened. Sometimes it is cut straight through.

So...if you like the sound of this ...then just look up www.fishthailand.co.uk  and hone in on the 'boon Mar Ponds homepage. When you come to stay here next year...for your winter break then maybe this could be on the itinerary.
Posted by Offshore Rebel Fishing Adventures in Thailand at 23:20