Richard Spracklen from Wool in Dorset has just spent four of the days of his Thailand holiday at the world famous Gillhams Fishing Resort. 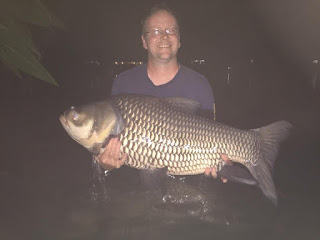 Richard is an extremely keen and very knowledgeable angler who loves, among other species, to fish for carp. It was his obtain a Personal Best Siamese Carp having enjoyed success with many up carp up to 25 kg.

Day 1 started at 1400 and resulted in an Alligator Garfish and later in the early night, a 45lb carp.

Richard was casting out about 60 yards and was using a range of Pallatrax pop-ups presented on hair rigs. Richard's favourite for the carp fishing at this venue are the yellow coloured, nutty flavoured pop-ups with pea-nut and Tiger-nut infusions.


Day 2 saw our man moving swims on the recommendation of his guide, Chris, who has been involved with Gillhams for over 6 years now. Well, if someone with that amount of guiding experience makes a suggestion it would be foolhardy to ignore it! The move made, Richard settled down with three rods on the go. and, despite all the expertise between angler and guide and oodles of patience plus stacks of regularly fed ground-bait the result was....nothing...no fish...blank!! 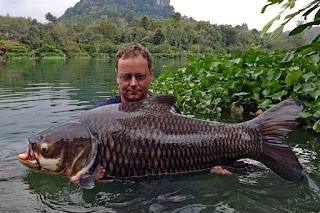 Now carp anglers are used to this. They are probably THE most patient anglers on the planet...so undismayed, Day 3 was apporached with the necessary optimism and even more ground-bait. Then, at 1215 (so a full day and a half without a bite), Richard latched into a 55lb carp caught on fake pellet.A 55lb carp is a very impressive and hard fighting fish and is one to be delighted with but then at 1545, Richard caught a magnificent 80lb carp (seen here on the left) which easily established his new Personal Best and left him buzzing with excitement.

Richard's absolute dream was to beat the 100lb mark but going into the final day with such a wonderful PB was already enough to please him.

But the story was not over. With a fishing time of 0700 to 1300 left on the final 'day', Richard caught another fabulous Siamese carp of 60lb.....and at this point he was convinced his Gillham's experience for 2018 was concluded.

But it was not because at less than an hour to go,Richard hooked into his dream fish. An hour's battle later, Richard guided in a magnificent Siamese Carp that weighed in at an amazing 120lb!!

Richard's mission (and dream!) had been fulfilled right at the very end of his stay. 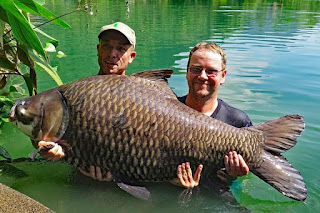 What a great story. I am sure anyone reading this will be absolutely delighted for Richard and so happy that his patience and willingness to listen to the advice of his very experienced guide, Chris, paid off.


When I met Richard 8 hours later back in Phuket he was still seriously buzzing from all this excitement.

Well Done to Suart Gillham for providing an amazing fishing resort and giving such dedicated anglers like Richard the chance to fulfill their angling dreams.

If you are interested in reading about this amazing piece of Paradise on our planed earth, I recommend you  accessing Stuart's website and having a really good read about it all.

Take your time reading all the information and scrolling through the many photo's.....it IS well worth it!

Posted by Offshore Rebel Fishing Adventures in Thailand at 06:36