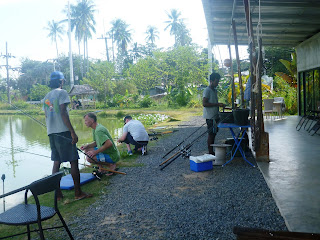 Dec 27th. We tried a mid-afternoon session which was to progress into the night until 2200....with a B-B-Q thrown in as part of the Chalong Fishing Park's weekly 'Wednesday Late Night Special' hosted by Jez Wilson.

Here is our magnificent team starting to set up with Ace guide, Boy, in the foreground, Mark Butland, Richard Spracklen and 2nd guide, Nim, with Dave Lovelock hiding behind a hanging basket. Me? Behind the camera of course! 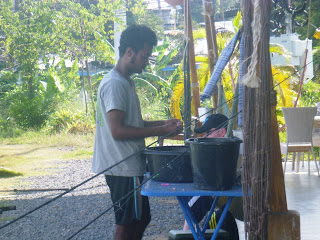 Various baits, including fish and chicken hearts for the predator fish, being prepared along with the Cage Method Feeder groundbait. 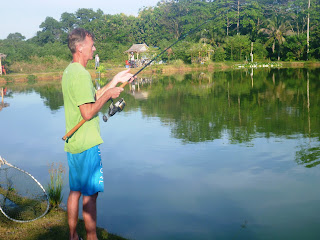 Mark Butland from Hants was straight into a Siamese Carp..... 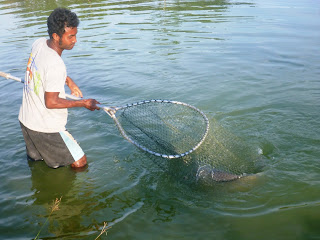 which was safely netted by Guide, Khun Lin. 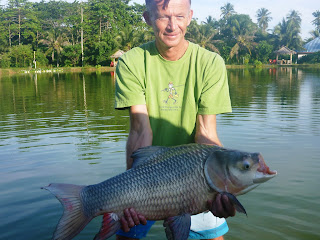 The carp are kept in the water for photographing as they are very powerful as well as slippery and are good at throwing themselves out of a photographic pose.....which is no problem if they crash back into water. 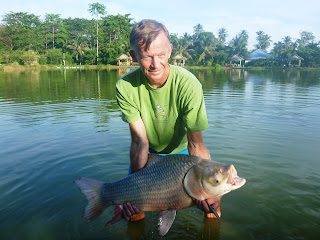 A nice photograph with a well supported carp.....the European run lakes here try very hard to look after their expensive fish stock....
Mark gently lowers his Siamese carp back into the lake. The water temperature is at least 30 degrees on the margins so there's no freezing limbs for the angler to endure. 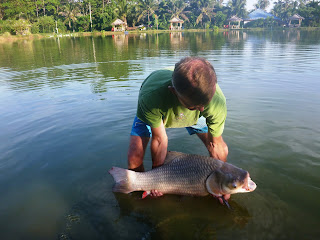 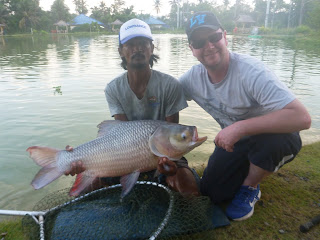 Khun Boy poses with a professional grip on the fish at  the water's edge for Dorset's Richard Spracklen who is currently sporting a fine leg injury which will not allow him into the water. 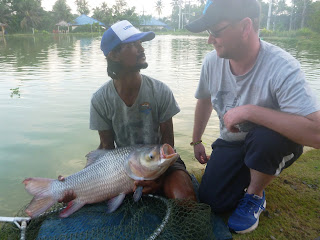 Richard and Boy stare longingly into each other's eyes as only anglers sharing a 'Special Fishy Moment' can. 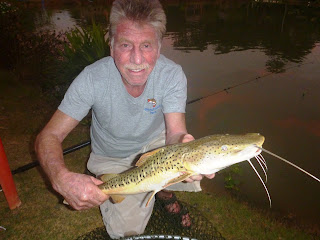 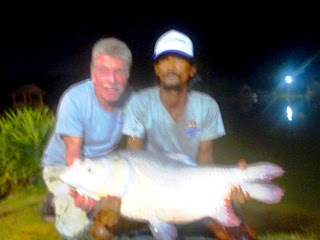 Dave Lovelock was busy throughout the whole session catching a variety of species including this more unusual Tiger Catfish.

And, below, Dave again with a nice Siamese Carp.....camera reverted into 'Shake Mode' for that shot (apologies, Dave). 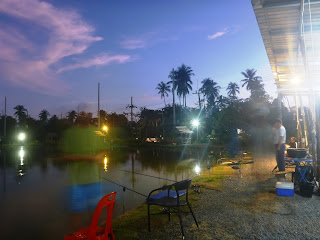 Nightime is always a magical time around a lake. We were experiencing a very pleasant short trouser evenings with a temperature of 24 degrees.... 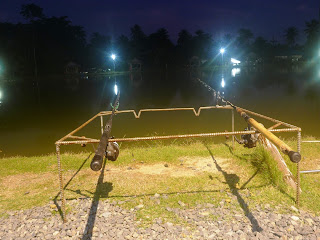 Relaxing behind the home made rod rests. The reels are all Shimano Bait-Runners which are essential for these powerful fish. 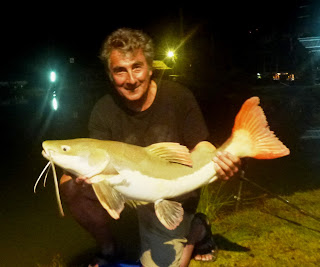 And yes.....even I caught a fish. In fact I was lucky enough to have a number of these red tail catfish and a couple of Siamese carp plus several other varieties of catfish.

The evening/night was very productive indeed with runs and hook-ups happening all the time...indeed, a very busy 'night' session. 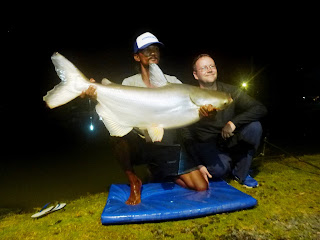 The Mekong catfish are rapidly increasingly in size with splendid fish like this one which Khun Boy is holding up for captor Richard Spracklen.

These fish are unbelievably powerful and require a fair time to coax them to the side of the lake for landing. 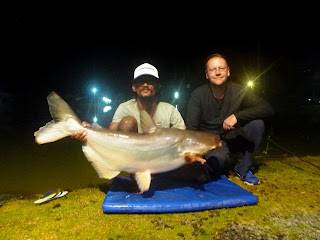 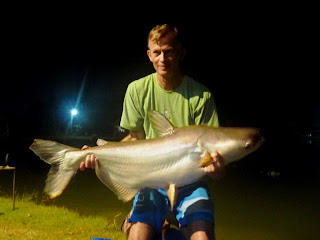 Mark also managed a Mekong which was one of three caught.


The fishing, along with a fantastic B-B-Q and the company of some great Irish lads who were also fishing made this a very memorable evening.
Posted by Offshore Rebel Fishing Adventures in Thailand at 01:25