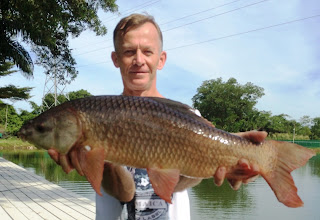 With England EFSA shore angling Maestro, Dave Lovelock off motor bike scrambling with fellow off-road enthusiasts, Hants angler  Mark Butland took himself off to one of the lakes we have fished in the past and returned with tales of amazingly productive fishing over his half day session.

Agitated by Mark's report, Mr Lovelock dropped his high powered racing scrambler into the gutter in order to join Mark at the aforementioned lake for an all-day session. 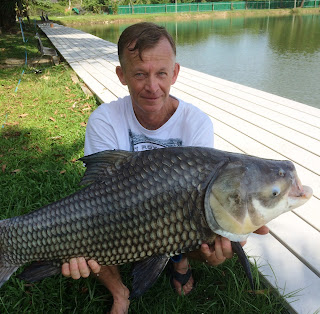 Fishing was not as active as Mark's previous session but both anglers managed to get into double figures of fish with most fish well into double figures on weight. Above shows Mark with the very attractively coloured  Hobiens     carp and here (Left) with the heavily scaled Siamese Carp which is renowned for its fighting abilities. 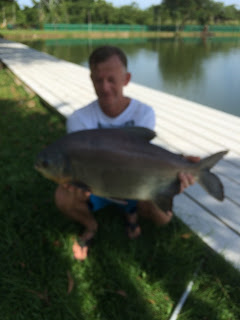 By now David, was quaking from the excitement and was losing his ability as a normally steady handed photographer  and had given way to the 'snapper's shakes' which gives a magnificently blurred image of the subject matter.....in this case a very impressive pacu. 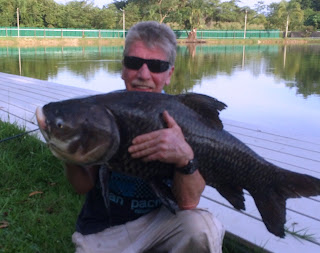 Those of you who know David will understand his deep love of all fish. Here he is seen getting emotionally and physically involved with the Siamese Carp he landed. This fish presentation technique is named in Dave's honour and is know as the' Love Lock'. (Some of our guests have tested this technique with other local species and reported back that it is very effective....but better employed in the short term only). 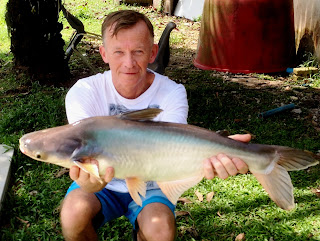 Mark's first session at this particular lake did not produce any catfish but yesterday's session saw them coming on the feed in the late afternoon. 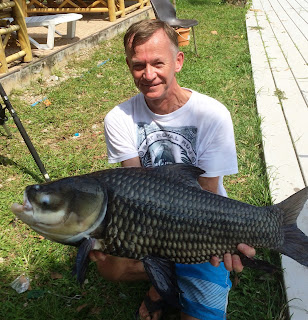 And here's Mark with another very nice Siamese Carp.

These fish are all taken using bread baits and cage feeders. 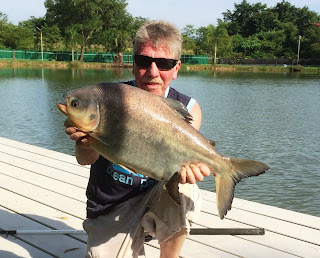 David presents what is, for its size, the most manic of fighters....the pacu. 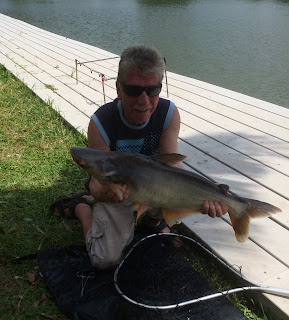 And here's Dave Lovelock with another of the catfish that started to show in the late afternoon.


When I first came to Phuket it was my intention for us all to do plenty of sea fishing. Over the time we have been here (since 2004 now!) the sea fishing has deteriorated to the point where we have been catching very tiny fish only. This is why we have moved onto the lake fishing. I know this is not necessarily a sea angler's 'cup of tea' but I urge guests to try at least one go.....once you have experienced the power and fighting abilities of these fish you may well be tempted to have another go.

And we are very fortunate here in Phuket as there are several lakes to choose from offering fish easily up to 20kg......and then, if an angler likes to try for a really big fish...we have the magnificent Exotic Fishing Thailand lake to visit. Although set in the Phang Gna Province which requires us leaving the island of Phuket, it can all be done in one long day...although it is better to stay for a couple of days to get the best from the lake.

In January, Mike and Dave are joined by Richard Spracklen from Wool, Dorset, and Art Powell from Somerset and the lads will be based at the Exotic Fishing Thailand lake for a four day session. (I am expecting some big fish photo's for the Blog from that!!).

Sea anglers may know Adrian Green from Gloucester who is a very regular customer on the Weymouth Charter Boats. I have featured Adrian several times with massive fish caught from Exotic Fishing Thailand. Adrian has just left Phuket to return to UK but is now so hooked on the incredible lake fishing that he has already booked to return on Xmas Eve for yet more lake fishing.

And it doesn't end there because our lake fishing experiences all started at Gillhams Fishery in another province of Thailand called Krabi. We can reach Krabi by crossing the Chalong and Phang Gna Bays by fast ferry where Gillhams' representatives meet the customer and take them to the fishery. Apart from the fishing, Gillhams aslo offers amazing scenery which is all part of the Thailand experience.

After fishing EFT, Richard will be crossing to Gillhams for another 4 day fishing session.....yes, these lads love their fishing!!!!


Posted by Offshore Rebel Fishing Adventures in Thailand at 05:41