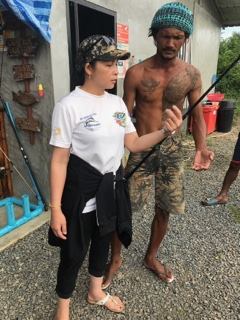 Today Kannika and I visited nearby Chalong Fishing Park as we have 4 whole days with no guests!

Kannika is seen casting an expert eye over the American imported mainline with her 'guide'  Khun Boy persuading her it was up to Offshore Rebel standards! Ha Ha! The rods are custom made and twinned with Shimano Baitrunners loaded with 30lb mono to 70lb braid traces.

Jez, the owner, is currently going through that decision making dilemma all charter skippers go through with their hire rods....to load the reels with braid with all the advantages and potentially even bigger disadvantages that this would afford over the more forgiving mono mainline.

On this occasion we did not bring our own tackle preferring to use Jez's. 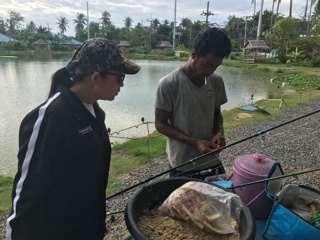 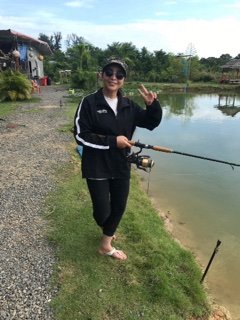 And now to business....adopting the cross ankle semi Thai Dance style pose seen so frequently in the earlier versions of the Ramakian (Sukkothai period) and adapted in various pictorial representations in the Indian Sanskrit Classic, The Karma Supra by Vatsyayana.


Note the use of the fingers to predict the estimated time expected before the first fish, an ancient gesture which has been adopted and at times altered throughout the world to convey a variety of meanings. 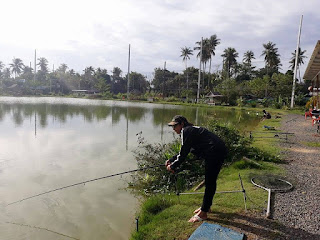 And sure enough, within the allotted time, our Squidding Queen is leaning into her first fish. 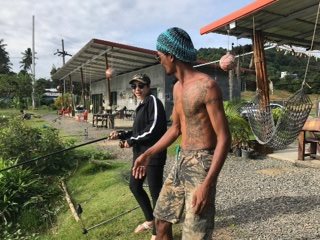 Chief Guide, Khun Boy, is soon there to offer advice on the importance of side pressure to keep the fish away from the roots of the water hyacinth.... 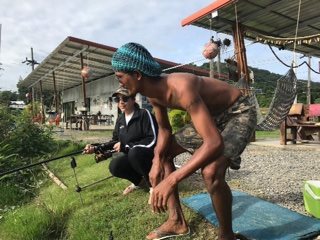 The two top anglers adopt the crouched technique, suggested in first editions of Fishing with Mr Crabtree classics in order to get line pressure at the correct angle to encourage the fish away from such obstructions. 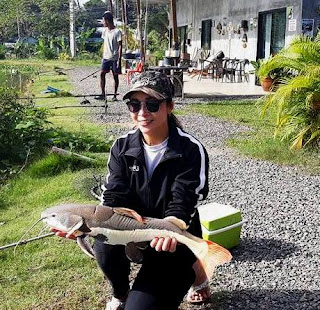 And here we are....a nice little redtail catfish.....one of a number of cats caught in our morning session. 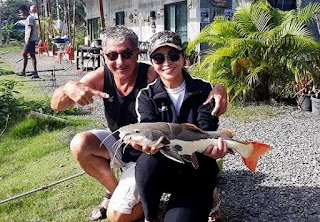 Every angling star has a 'Hanger-On' waiting to share the glory... 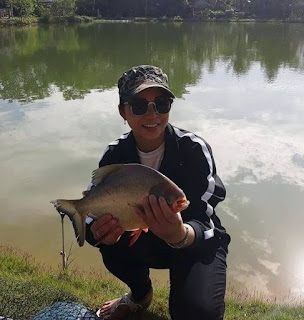 This fish is known as a Java Barb...it looks a bit like a roach....we're getting closer to what we were after...... 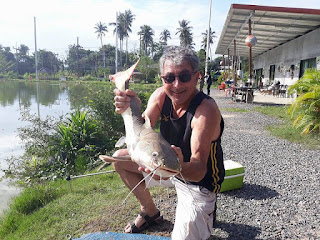 And another small redtail for me....

so, you ask...why are such infamous anglers catching these smaller fish....well, it was because we were actually trying to catch tilapia...which we eventually did.


And here we are (shown below) our designated species...the tilapia. And why this species in particular? .OK...at this point I hand over to Wikipedia....

Tilapia Fish Thrive In Thailand; Thanks to an Initiative of King Rama I
Most, if not all, Thais do not know the Tilapia Nilotica by its full-fledged name. But most, if not all, have probably eaten it before.
It’s one of the most eaten freshwater fish in Thailand, with 220,000 tons produced for the local market per year, according to the Department of Fisheries. It’s seen regularly on the dishes of your average Thai households and restaurants. It’s also the fish, that nearly seven decades ago, helped villagers in rural areas avoid starvation and malnutrition, and today it’s helping agriculturalists and farmers make a living. Unsurprisingly, it was King Bhumibol Adulyadej that introduced the species to Thailand in 1966, hoping to provide protein and nutrients to villagers in rural areas. However, he had been researching and experimenting about the tilapia species’ biology and breeding habits since 1951 – the first species being the Tilapia mosambica, or pla mo thet in Thai. “Why did he choose the pla mo thet? Because local fish – like local carp, or pla tapian, would only reproduce once a year,” explained Supawat Komolmarl, director of the Royal Fisheries Initiated Project Division of the Department of Fisheries.
The tilapia species would give birth every three months. Tilapia also is easy to raise as they are mouthbrooders – meaning that the female fish incubate their eggs in their mouth. Once the eggs develop into young fish, she lets them go, and in six months time, they’ll be a good size to eat or sell.
Posted by Offshore Rebel Fishing Adventures in Thailand at 03:05