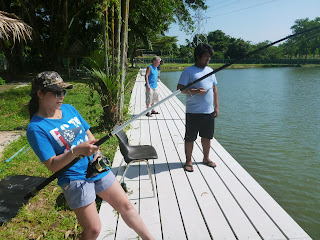 Well..yesterday was an action packed day. We were aiming for Siamese Carp but lost count of the amount of maniacal Pacu we caught.....they are such amazing scrappers.

Here we see Kannika putting her best foot forward to control the first Pacu that took the float fished bait the instant it landed on the water. 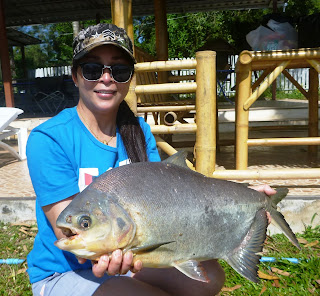 And here it is....the first one...and there WERE loads. We were trying hard NOT to catch them by casting in the opposite direction to where they seemed to be shoaling. 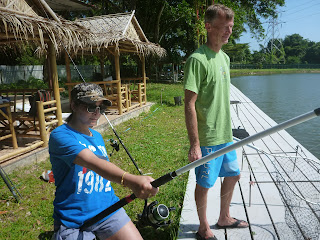 Madam has perfected the 'Power Stance'! Who would have thought that the frequent sessions we subject ourselves to in the nearby Gym would be so useful for freshwater fishing?? 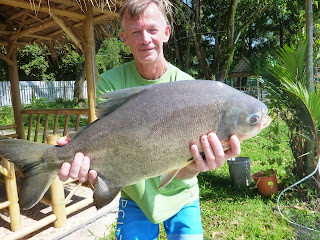 Mark Butland from Herts...always seeming to be into a fish throughout the day...presents another Pacu. 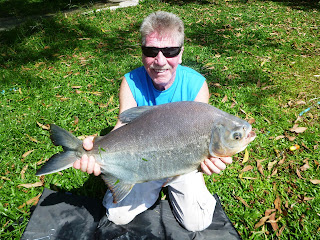 And EFSA England International, Mr Dave Lovelock was also in on the act...this is certainly not freshwater fishing as some might imagine. There's none of that relaxing and  sitting around nonsense!

Although we were allowed to use two rods, there is no way we could have kept up up wih the non stop action.....much better to concentrate on using just the one rod....and hanging on to it!! 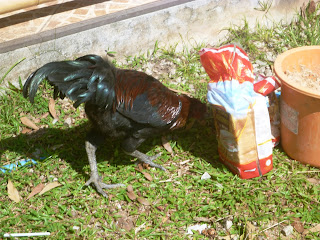 The chicken......a symbol of Thailand....they are everywhere and have no qualms about getting stuck into the bait. 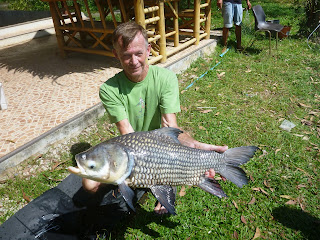 After an opening hour of utter Pacu madness, the fishing calmed down and were in with a chance of our target species, the Siamese Carp. Although they look the same ....all the fish photographed here are different ones....and I only took shots of two or three of each of the fish our intrepid team caught. Like the Pacu, there were plenty of carp now on the feed. 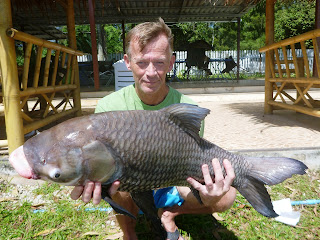 Here's Mark with another hefty carp.... 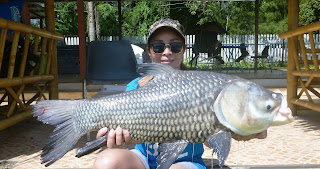 And dwarfing our Kannika...this cracker which decided to try and escape in the shot below.....love that facial expression as Kannika managed to 'hold on'! 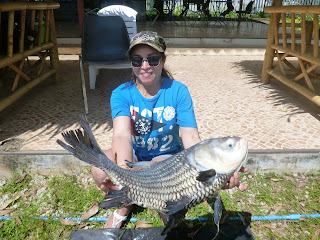 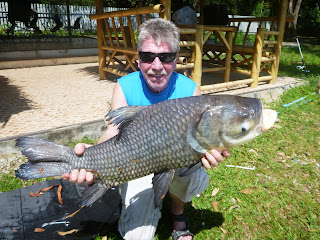 And another for Dave. This was ceratinly a red letter day for us.....and apart from our little gorup of four, I did not see another fish come to the net around the lake. It was certainly 'our' day and we were undoubtedly  in the 'Hot Swim'. 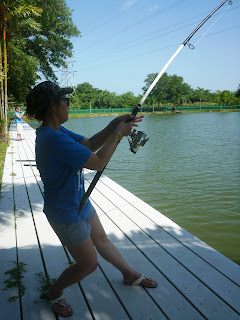 Kannika powers into another carp that was racing off to the far corner of the lake, 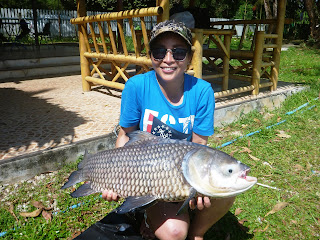 What a great day....I really urge anyone coming to stay with us to have a go at these fish...it IS action packed fishing. 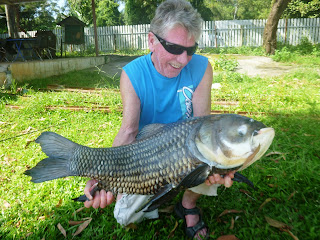 David has now perfected the carp angler's admiring pose. Sea anglers tend to look the camera right in the eye...but a freshwater angler, especially a carp angler, gazes lovingly at his fish which is seen as the real 'star of the show'.

We all know fishing can be as unproductive some days as it can be insane on others. This was one of those days to savour and remember....it is not normally THIS good but be assured that it is extremely unlikely to have a blank day and just ONE of these carp would be a dream come true for many of us.

Posted by Offshore Rebel Fishing Adventures in Thailand at 01:49