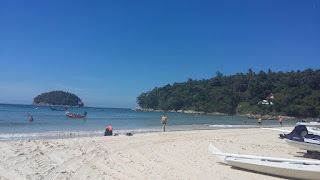 We spend a lot of time at nearby Kata Beach for our shore diving. We park nearby and kit up and then waddle along the road trying to avoid the motor-cyclists....who are actually blind and will think nothing of crashing into each other or you....to the beach. In the distance a small island can be seen. Our diving takes us out towards that island where the Thai Government have sunk a number of concrete cubes. 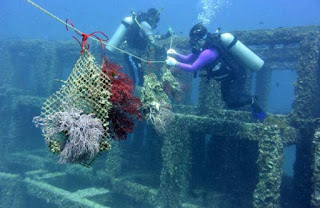 The cubes are lowered into the sea and then corals are planted on them. There are a few ecologically aware Thai people but they are in the minority and so it must be very frustrating for them when so many souvenir hunters (not Scuba Divers I hasten to add...PADI is very strict about touching let alone taking anything from the sea and divers tend to be very respectful of their environment) and commercial fishermen do everything to undo such efforts. Here a line of corals that have been 'reared' for a year are ready in place for 'planting'. 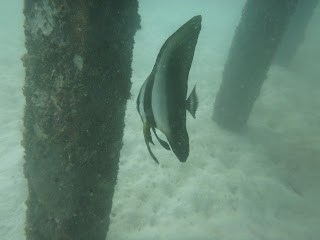 The cubes at Kata are not neatly lined up such as those seen above. They are stacked on top of each other and appear to have slipped so that they are at crazy angles to each other. This is very good as there is STACKS of sea life there, especially shrimps and moray eels hiding in the cracks where the cubes rest at 45 degrees to each other.

It's only 10 metres deep here but thee's always an impressive number of batfish around. 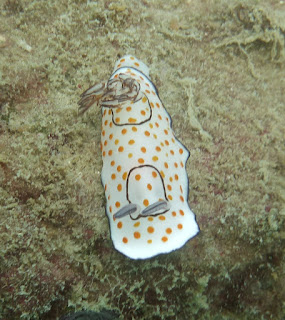 Sometimes....and yesterday was one such dive...we come across such impressive Nudibranchs as this 'Twin Magnificent Slug'. They are not the fastest movers in the marine world and so I was very impressed to see this one rushing along as only a slug can do towards the edge of one of the cubes....ready to launch itself over the precipice into the unknown. This Slug  must be the Jonathan Livingston Seagull of the Nudibranch world. 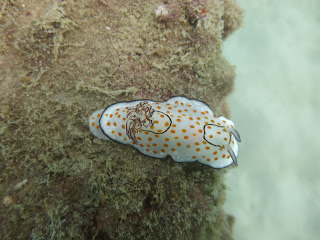 And here it goes....a fantastic moment in Underwater Photography!! 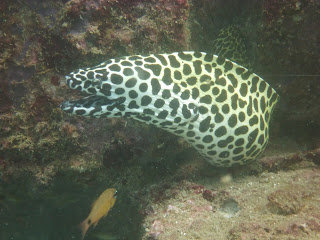 We (Mike Fitton and daughter Faith from Alderney and me) were impressed at the amount of little moray eels all over the place and then we stumbled  across this juvenile Honeycom Moray. 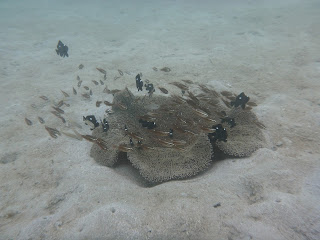 On a previous dive we came across this isolated anemone which is packed with life. In addition to the clown fish protecting their eggs and young, very colourful and delicate shrimps....such as the aptly named 'Beautiful Shrimp'....came be seen hiding in amongst the anemones fronds. 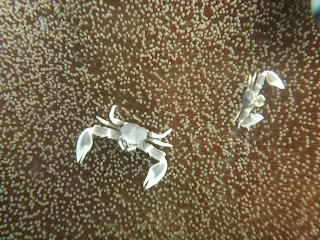 On this occasion we were treated to two anemone crabs...very photogenic as set off against the anemone background colour. 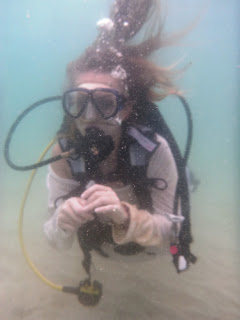 Faith (seen here) and Mike (below) have now completed their PADI (Professional Association of Diving Instructors) Open Water and Advanced Open Water Courses during their stay with us here in Phuket.

Before they embarked on the actual course we spent a couple of lengthy sessions in the house pool, did two one hour shore dives down to 10 metres and spent quite a lot of time going over the theory for this level. They both assured me that this Pre-Padi Course was a great help in enabling them to get the best out of the PADI courses. Their four days of practical work included more pool training and then 6 dives in the sea followed by a further three dives  for their Advanced Certificate.

Yesterday was their last chance for a dive before returning to UK tomorrow....and it was great to see how well they have developed over what has been 8 days of sustained diving and dive theory.  This was something they had always wanted to do....so congratulations to both on sticking at it despite the inevitable Tropical Tummy Traumas!! 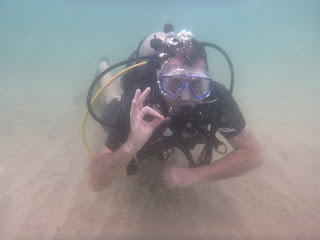 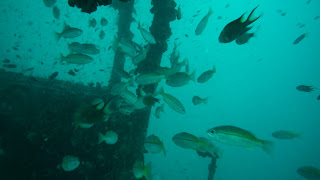 Faith has treated herself to an Intova underwater camera which looks very similar to the Go-Pro. Her photography has come so well.....these last photo's are hers and I am sure there will be many more for her friends to see appearing on her own Facebook page. The images are very clear and show how attractive to fish an underwater obstruction is....just imagine how busy our Channel wrecks are! 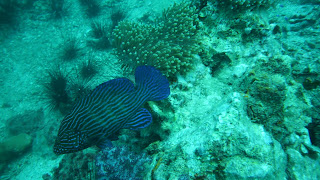 Wrasse are an important species in Angling Competitions in UK with Weymouth no exception  With ballan, corkwing, cuckoo, gold sinny and baleen wrasse it i soften difficult for anglers to distinguish correctly between them.

Here in Southeast Asia's waters thererare at least
86 different species of wrasse!! Now that WOULD make for complications in correct identification. 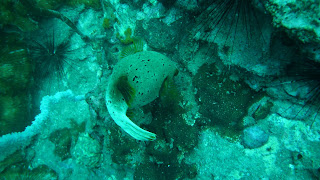 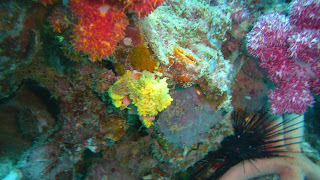 Filming with flash brings back the colours on the reefs...especially restoring red which is the first colour to 'go'. 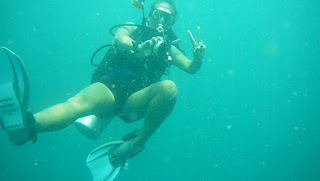 Yesterday was a great dive....loads of fish to see including many blue spotted rays. A great way to finish off the diving part of the holiday! Well Done to Mike and Faith for sucessfully completing their diving aims....and for talking about a return next year to progress to to a Liveaboard Trip to the Similan Islands.
Posted by Offshore Rebel Fishing Adventures in Thailand at 20:31